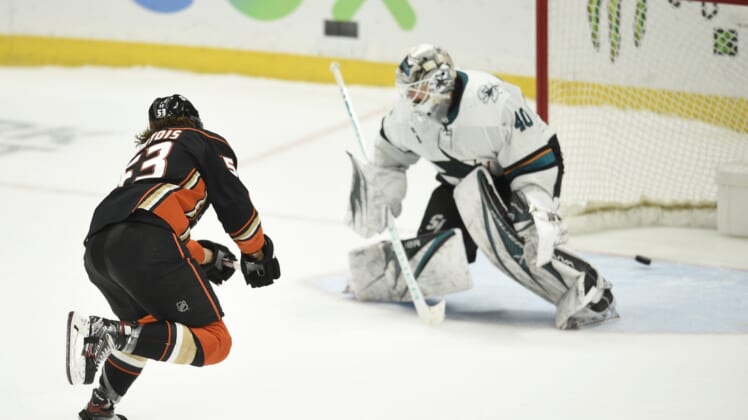 The Anaheim Ducks might have a solution for their struggling power play.

The Ducks, who have converted on just 8.8 percent of their power plays this season, visit the San Jose Sharks on Monday. The Sharks have allowed three power-play goals in each of their past two games.

“One thing we’re never going to do is give up on it,” Ducks coach Dallas Eakins said of the power play. “We do have players, I still believe, who can execute and score. We’ve just got to shake this doom and gloom on the power play because it has built up over years.”

Anaheim finished second-to-last in the NHL in power play efficiency last season (14.4 percent), and was in the bottom 10 in the league the previous two seasons.

“It’s almost like this black cloud over top of us that’s about to rain down on us, or bring some bad weather that we can’t get out of our organization,” Eakins said.

Anaheim has still managed to post a 3-1-1 record over its previous five games, which included wins against the Los Angeles Kings, Sharks and Vegas Golden Knights.

The Ducks blew a 4-1 third-period lead against the visiting Sharks on Feb. 5 and lost 5-4 in a shootout, but came back the following night and beat San Jose 2-1 in another shootout.

The Sharks, who played their first 12 games on the road this season, ended their trip with a 6-2 loss to the Kings on Thursday before dropping their home opener to Vegas, 3-1, on Saturday. The Golden Knights scored all three of their goals on the power play. The Sharks were scheduled to open their home slate on Feb. 1 and Feb. 3 against Vegas, but both of those games were postponed due to COVID-19.

“Anytime you give up three on the (penalty kill) in back-to-back games, obviously you’ve got to work on it,” Sharks center Logan Couture said.

San Jose defenseman Brent Burns said the Sharks have been making it too easy for opposing teams to get into their power play sets.

“It’s usually not the first guy, it’s the second and third guy that have to be on the same page and pressuring,” Burns said. “(We need the) first guy pushing that guy into a mistake, and the second and third guys are already going. I think that’s where we’ve been really successful in the past, and we just got to get back to being disruptive and reading off each other.”

One bright spot for the Sharks has been forward Tomas Hertl, who has three goals in the past two games, his first goals since combining for three in the first two games of the season.

Evander Kane doesn’t have any points in the past two games, but he had a goal and two assists in the two games in Anaheim earlier this month.

Ducks goalie John Gibson is coming off his third shutout of the season, all by the score of 1-0, and will likely be in net in Anaheim’s first game since Thursday in Las Vegas.

Max Comtois scored the lone goal in the win against the Golden Knights and has a team-leading six goals on the season, but none of his Anaheim teammates have more than three goals.