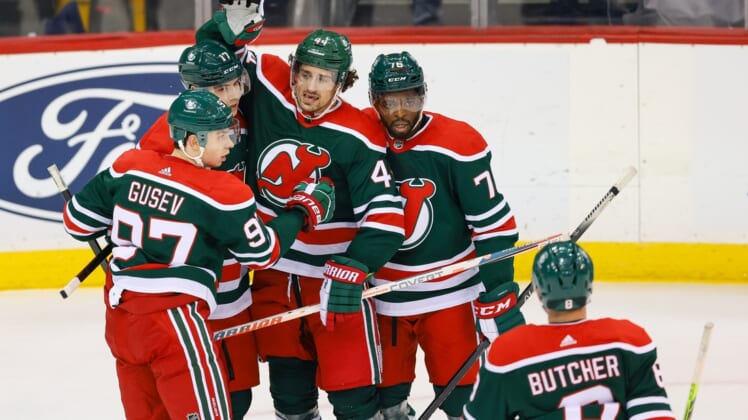 The New Jersey Devils found a way to give themselves a little confidence going into Thursday’s home game against the Pittsburgh Penguins.

They won a home game.

That might sound like a relatively minor thing. Teams are supposed to dominate on home ice. The Penguins, for example, are 12-3-0 at home. But it has been a struggle for the Devils, both at Prudential Center in Newark and elsewhere.

Their 3-2 win Tuesday over Buffalo — the only team beneath New Jersey in the East Division — snapped an 11-game home losing streak.

“For the morale of the team, it’s big,” said Miles Wood, who notched the winning goal Tuesday. “We’ve gone through a bit of a rough patch, but that’s behind us.”

The Devils, who sit near the bottom of the overall NHL standings, were coming off a four-game losing streak but are finding reasons to feel better about their game.

They have scored a power-play goal in two straight games after an eight-game drought. And goaltender Mackenzie Blackwood made 33 saves Tuesday to keep things close.

“I have no doubt in my mind that (Blackwood) is going to return to form,” New Jersey coach Lindy Ruff said.

New Jersey got an update on team captain Nico Hischier, who got hit by a puck Feb. 27. He is out of concussion protocol and on Monday had surgery to repair a sinus fracture.

“We probably got the best news possible, with the fact that it’s, like, a three-week (recovery) range vs. a scenario that could have been month-to-month,” Ruff said.

That might help lift the Devils’ spirits some, but it won’t help them immediately.

The game against the Penguins is the first of two straight, Thursday and Saturday, between the teams in Newark, and the first of three in a row overall, as the Devils play Sunday in Pittsburgh.

These games are the first of the season between the teams.

The Penguins also had a streak end Tuesday. Their six-game winning streak came to a halt with a 2-1 loss to Boston.

Perhaps of even greater concern was the possible loss of Evgeni Malkin, one of Pittsburgh’s two keystone centers. Malkin left the game after taking a hit from Bruins defenseman Jarred Tinordi that seemed to affect his right knee.

Penguins coach Mike Sullivan called it a lower-body injury and said Malkin was still being evaluated. Pittsburgh had a day off from practice Wednesday, so it is unclear when there might be an update.

Malkin had been flying after a slow start to the season, including an eight-game point streak before Tuesday.

Compounding things, third-line center Teddy Blueger was a surprise scratch for Tuesday’s game, and Sullivan revealed that Blueger will be out “longer term” because of an upper-body injury.

That leaves Pittsburgh with strained depth at center.

Beyond the injuries, the Penguins weren’t hanging their heads over the end of their winning streak.

“I thought we competed hard,” said Sidney Crosby, the Penguins’ other keystone center. “Usually, with an effort like that, you’re rewarded.”

Going into their first matchup with New Jersey, Pittsburgh has fared well against the other two teams that make up the bottom three in the East — 5-1-0 against the New York Rangers and 2-0-0 against Buffalo.