PREVIEW: After rout of North Carolina, Wisconsin ready for No. 1 Baylor in South 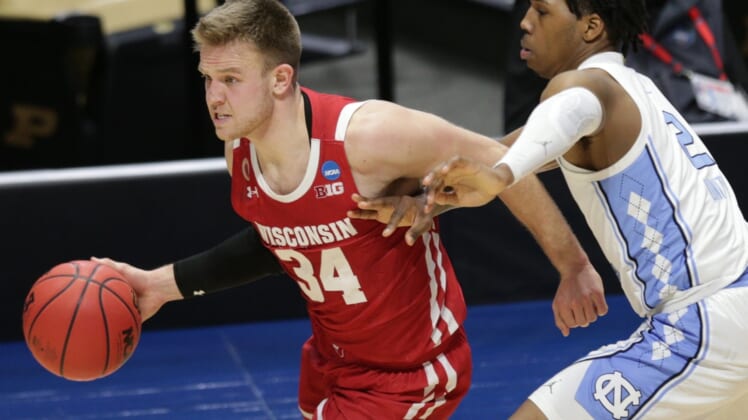 Wisconsin might need a repeat type of performance to come up with an even bigger upset.

But the Badgers know they have it in them.

Wisconsin will take on Baylor, the South Region’s top seed, in the second round of the NCAA Tournament on Sunday at Hinkle Fieldhouse in Indianapolis.

“We’re really looking forward to the opportunity we have ahead of us,” Wisconsin guard Brad Davison said.

Baylor (23-2) is coming off an impressive performance in the first round as well, but nothing to the magnitude of ninth-seeded Wisconsin’s destruction of eighth-seeded North Carolina.

Wisconsin (18-12) has just two victories since a Feb. 21 win at Northwestern, but that’s enough to keep the season afloat.

“It’s huge, and that’s why you come to Wisconsin — to compete for championships,” Davison said.

Davison did his part with 29 points as the Badgers routed North Carolina 85-62 in the first round Friday.

Wisconsin had just seven turnovers in the game, and ballhandling figures to be important against Baylor’s ball-hawking defense.

The Bears will present different issues from North Carolina for Wisconsin to address. But the Badgers figure they’ve had an array of experiences in Big Ten Conference competition.

“One of the blessings and curses of being in the Big Ten was that we faced great big men every single night,” Davison said of dealing with North Carolina’s front line.

Baylor is a more experienced opponent than North Carolina, which relied on numerous freshmen. Still, the Bears are adjusting to their role as a No. 1 regional seed for the first time in program history.

“I knew teams would be nervous,” Baylor coach Scott Drew said. “A lot of guys, it was the first time in the tournament. We’ve been here for a little bit, and anticipation was high.”

Baylor had a lower-profile foe in the first round, trouncing Hartford 79-55 behind 22 points from MaCio Teague, who was playing in his first postseason game for the Bears.

It might have been an ideal way for Baylor to open play in the NCAA Tournament.

“I thought the guys started to relax and felt a lot more comfortable,” Drew said.

Wisconsin has a veteran unit, so the Badgers hope to ride that into the second week of the tournament.

“The one thing about the tournament is it doesn’t really matter what you’ve done prior,” Wisconsin coach Greg Gard said. “It’s still about the next 40 minutes. That’s all that matters.”

Wisconsin reached the 80-point mark for just the second time since Christmas. The outcome reflects the fourth-largest margin of victory this season for the Badgers.

The South Region’s Nos. 2 and 4 seeds — Ohio State and Purdue, respectively — already have been eliminated, meaning the winner of the Baylor-Wisconsin game might have a clear path toward the Final Four.