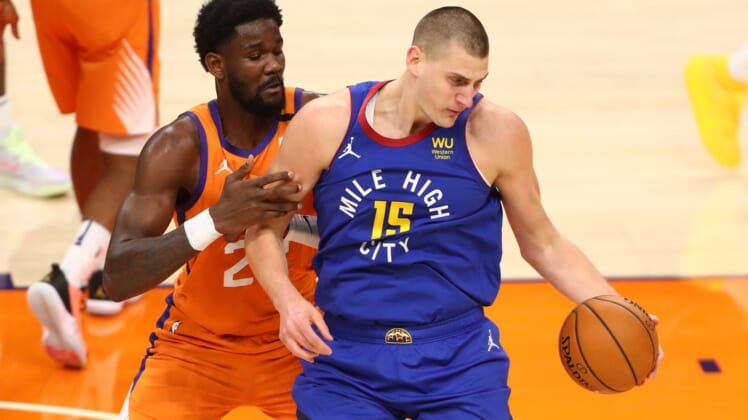 The Denver Nuggets and Phoenix Suns worked overtime Friday night, and they will be right back at it Saturday night.

Less than 24 hours after the Nuggets rallied to win 130-126 in overtime, the teams will tip-off again in Phoenix to finish up a quick two-game set.

The Suns may not have star Devin Booker for the rematch. Booker, who scored 31 points, was injured late in overtime during a scramble for the ball. After the game, coach Monty Williams said Booker hurt a hamstring, leaving him doubtful for the Saturday contest.

If Saturday’s game is anything like Friday’s, it will be a good one.

Phoenix led by as many as 14 but Denver rallied to tie it late in the fourth quarter, then won it in overtime. The result put the 8-7 Nuggets over .500 for the first time this season, and it was the 15th straight game in which Nikola Jokic had a double-double.

When Jokic was on the court, the Suns made sure they gave him plenty of attention. Still, he finished with 31 points, 10 rebounds, and eight assists, with one of the helpers coming on a touch pass to Paul Millsap in the third quarter.

Those types of assists impress Williams.

“The passing,” Williams said before Friday’s game. “Some of the stuff you see on tape with him, you just rewind it because you’re trying to see what he saw before he made the pass. You don’t see it in real-time.”

If Denver wants to sweep the two games, it will need to play 3-point defense as it did in the second half rather than the first half Friday night. Phoenix was 11-for-25 from long range in building a 68-54 halftime lead, hitting its last six 3-point attempts before the break.

The Suns hit just 6 of 19 3-point attempts in the second half and overtime, with the only one in the extra five minutes coming after Denver built a five-point lead in the final seconds.

The Nuggets can take comfort in their ability to rally against a hot-shooting team.

“We just wanted to come out aggressive, with some grit, and not give in,” Monte Morris, who scored 17 points, said about Denver’s mentality after halftime. “We didn’t want to come and be like, ‘We can get them tomorrow.’ We wanted to come out establish ourselves and feel good about (Saturday).”

The Nuggets got a boost Friday with the return of Michael Porter Jr., who had missed 10 games due to coronavirus issues. Porter had seven points and six rebounds in 20 minutes off the bench in his first action since Dec. 29.

“(At first) I didn’t experience any symptoms, but then like basically the last night before getting off, my smell was faint and my taste was faint, but I got my taste back and my smell is starting to come back a little bit now,” Smith said Friday.