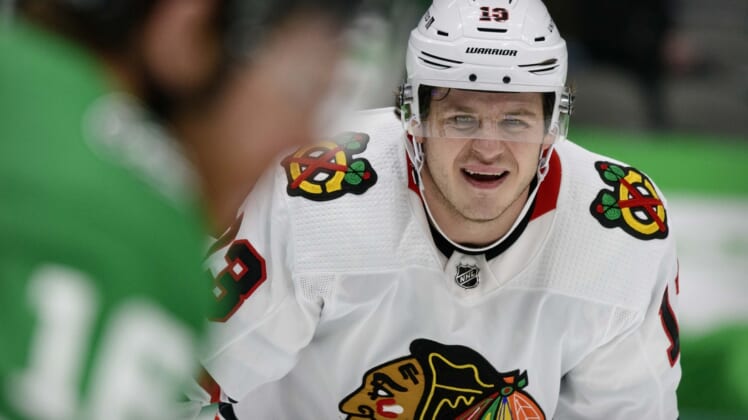 A promising recent run for the Chicago Blackhawks encountered a snag over the weekend as the team lost two of three in a home series against the defending Stanley Cup-champion Tampa Bay Lightning.

Sunday’s rubber match was there for the taking, but Chicago squandered a 3-0 lead early in the second period, surrendering six unanswered goals to close the game.

The condensed schedule offers little chance to sulk, however, as the Blackhawks begin a six-game road trip Tuesday, kicking off a two-game set against the Dallas Stars. Chicago is 2-0 against Dallas this season, winning successive road games 2-1 in overtime on Feb. 7 and 9.

After Sunday’s game, the Blackhawks’ Mattias Janmark stressed the importance of moving on from lost opportunities against the Lightning.

“This loss was very disappointing,” Janmark said after recording a goal and an assist. “I feel like we could’ve won all three games here. “Obviously, they could’ve done that, too. There’s some positives here. It’s a good team and we’ve proven we can play with them, but now it’s up to us to respond from this loss here.”

For Blackhawks coach Jeremy Colliton, Janmark showcased the kind of aggressive play the team needs — both for a response against the Stars and to keep the Blackhawks motivated when they get moving again.

“A lot of our team was skating really well and coming up with loose pucks and being relentless,” Colliton said. “That’s our calling card. That’s how we are hard to play against. He obviously had some good shifts, and you like to see guys get rewarded when they do that.”

Chicago heads to Dallas with veteran forward Patrick Kane set to play in his 1,000th career game. Kane reached another milestone Feb. 28, registering the 400th goal of his career in a 7-2 rout of the Detroit Red Wings.

The Stars are 1-3 in a six-game homestand that concludes with the series against the Blackhawks. Dallas lost for the fifth time in six games Sunday, storming back from a 3-0 deficit in the third period before falling to the Nashville Predators in a shootout 4-3.

Dallas did all of its damage in the final 7:30 of regulation, but veteran Joe Pavelski reiterated that the team must find its sense of urgency earlier in games.

“You get a little desperate and you start really playing on your toes and pushing, and there are points out there that we need and want,” said Pavelski, who scored the Stars’ second goal, giving him a team-best 12 for the season. “For whatever reason, we get rolling. And once we get that first one, we seem to get a second one, and it’s about getting that first one earlier.

“There is no quit in the team, obviously. We are still going, and we’ve still got some belief. You saw it tonight. Big game and tough to not get that extra point there at the end.”

Dallas captain Jamie Benn had an assist Sunday and stands one point shy of 700 for his career (304 goals, 395 assists).