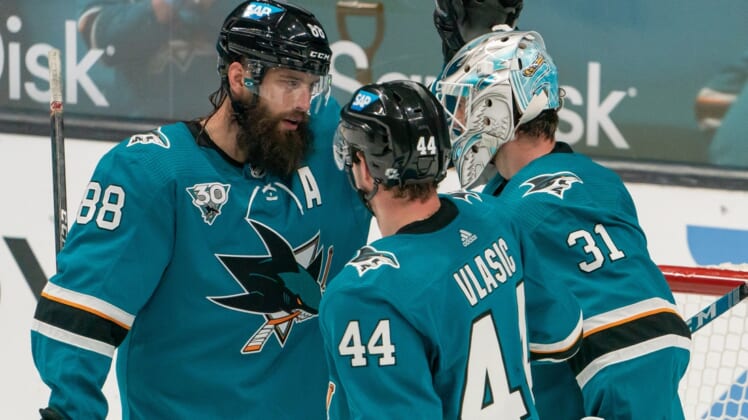 After finally enjoying a home-ice victory, the San Jose Sharks return to the road to face the St. Louis Blues on Thursday.

Due to various COVID-19 complications, the Sharks played their first 12 games away from home. They returned to San Jose for two games, a 3-1 loss to the Vegas Golden Knights on Saturday and a 3-2 victory over the Anaheim Ducks on Monday.

“It was good to respond,” Sharks coach Bob Boughner said. “We needed this win before we get on the road for another tough building in St. Louis.”

The Sharks face the Blues in a two-game set in St. Louis, with the second game on Saturday night.

The teams split two games there earlier this season, with the Blues winning 5-4 and the Sharks prevailing 2-1 in a shootout.

The Blues just wrapped up seven consecutive games against the Arizona Coyotes. They went 3-3-1 in that series while adding winger Robert Thomas and Jaden Schwartz to their injury list. Also, defenseman Torey Krug exited the last game early with an upper-body injury.

“We’ve got a lot of hockey left, and I don’t think you can tell the tale of our team,” forward Brayden Schenn said. “We’re banged up, we’re injured, guys are battling hard, competing hard. Some moments we weren’t great; (at the) same time we had some good games and worked hard — and I don’t think you’ve seen our best hockey yet this year. I know it’ll come with everybody rolling and a healthy lineup.”

The Blues could get Schwartz and defenseman Marco Scandella back as they try to get back on track. Krug skated Wednesday, so he could go as well.

“There are a lot of things to clean up,” Blues captain Ryan O’Reilly said. “It wasn’t perfect, we did a good job at times finding a way to win but we have to … get better at knowing it’s going to be tough, and every team in this league is so good and we have to be consistent.”

The Sharks were missing defenseman Erik Karlsson and Radim Simek against the Ducks. Fredrick Claesson and Nicolas Meloche replaced them on the blue line.

“We had some guys that had to step up and they did,” Boughner said. “Early on in the game, you could tell that we didn’t have a lot of chemistry back there. But as the game went on, the defense tightened up. I thought we were more confident in our breakouts as the game went on.”

With Karlsson out, Brent Burns ran the point of the Sharks power play.

“I liked it. I think we had good possession time,” Boughner said. “We didn’t rush our shots. We were selective on where we were shooting from, we get to tire them out a little bit. We want to be in more of attack mode. I thought we had a much different look with Burnsie on top. The penalty killers have to respect that big shot up there, and that opens up the flanks a little bit.”

Jones earned a shootout victory over the Blues earlier this season. He is 6-5-0 with a 1.99 ERA in 11 regular-season games against St. Louis.