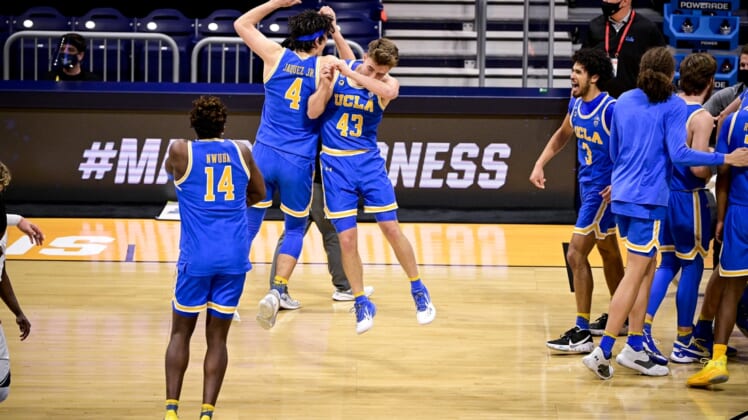 Mar 20, 2021; Indianapolis, IN, USA; The UCLA Bruins celebrate the win over the Brigham Young Cougars during the first round of the 2021 NCAA Tournament at Hinkle Fieldhouse. Mandatory Credit: Marc Lebryk-USA TODAY Sports

Cinderella is alive and well and will continue to be when 14th-seeded Abilene Christian squares off against suddenly surging UCLA on Monday in an NCAA Tournament East Region second-round game in Indianapolis.

Abilene Christian advanced to play the 11th-seeded Bruins via a stunning 53-52 win over third-seeded Texas on Saturday as Joe Pleasant canned two free throws with 1.2 seconds to clinch the victory.

UCLA is 2-0 in this tournament, beating Michigan State 86-80 in overtime on Thursday in the First Four before handling sixth-seeded BYU 73-62 on Saturday in the tournament’s first round.

Coryon Mason and Pleasant led Abilene Christian (24-4) with 11 points each in the first-round game. The Wildcats, who have won five straight games, including the Southland Conference tournament after finishing as runner-up in the regular season, are making just their second appearance in the NCAA Tournament and posted their first-ever victory.

The Wildcats, who led the nation in creating turnovers this season, forced Texas into a season-high 23 miscues and outplayed the Longhorns, the Big 12 Conference champs, down the stretch, coming from behind in the final seconds.

Pleasant corralled an offensive rebound, was fouled with 1.2 seconds to play and hit his two free throws to give the Wildcats the unlikely win.

“You gotta believe that you can beat any team that you’re playing,” Pleasant said. “They’re just like us, you know — they put their pants on the same way we do, one leg at a time. We go out there and compete.”

It was the first win for UCLA in regulation in almost a month, after the Bruins beat Utah on Feb. 25. UCLA is one of five Pac-12 teams to advance to the second round.

Juzang scored 23 points in Thursday’s win over Michigan State but was unable to finish after suffering a high ankle sprain in the final minute. The guard’s status for Saturday’s game was unknown up until tipoff but he was ready early, scoring 19 of his points against BYU in the first half.

“We’ve got some warriors on this team, and we’re going to try to keep that going, playing with heart and leaving it out there, because any game could be your last one,” Juzang said after the win over BYU. “So we know that. It’s a great feeling. This is what we live for.”

UCLA, which had only four turnovers, led 38-27 at the break. BYU used a 10-0 second-half run to pull to within 43-39 before the Bruins responded with an 11-4 surge to re-establish a double-digit lead. BYU never got closer than seven points down the stretch.

“It took everything our guys had on the defensive end tonight,” UCLA coach Mick Cronin said. “That’s where our focus was. And we were able to take them off the 3-point line. It wasn’t easy. I can’t tell you how hard that was for our guys and how proud I am of how hard they played.”