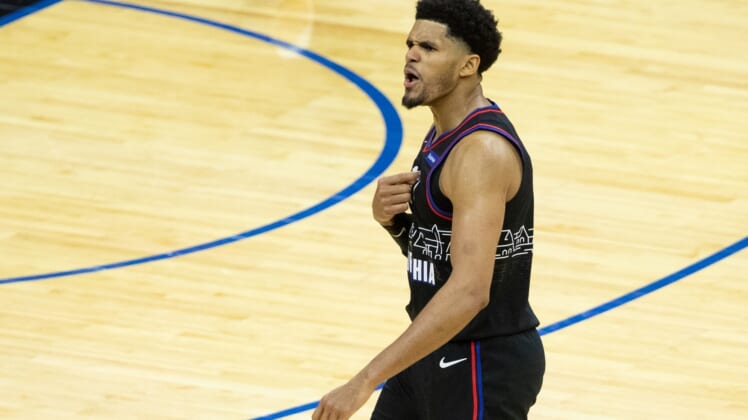 The Philadelphia 76ers’ Tobias Harris hasn’t been shy about expressing his disappointment over not being selected as an Eastern Conference All-Star.

Harris continues to show that he belonged with the league’s elite players.

The Sixers are riding a season-best, six-game winning streak entering their matchup with the visiting Milwaukee Bucks on Wednesday, and Harris has been a main reason for the team’s success.

Harris led the Sixers with 30 points on Tuesday in a hard-fought, 99-96 victory over the visiting New York Knicks. Without Joel Embiid out for a minimum of two weeks due to a bone bruise on his left knee, Harris took control in the fourth quarter with a pair of huge baskets down the stretch.

“What matters to me is what can I do better to help us win with the big fella down,” Harris said in a postgame interview on NBC Sports Philadelphia. “It’s a new challenge. We need everybody to step up.”

After one of his late baskets, Harris appeared to yell, “I’m an All-Star” to the crowd.

“I’m sure it fuels him,” 76ers coach Doc Rivers said of Harris being snubbed. “He is an All-Star in my opinion.”

After such a physical game, the Sixers will get little rest before the Bucks visit in less than 24 hours.

“They’re long. They’re athletic,” Rivers said of the Bucks. “The biggest thing for them is they’ve been playing together.”

The Bucks will be looking for their fifth straight win and their 10th in 11 games.

In their most recent contest, they defeated the host Washington Wizards 133-122 on Monday thanks in large part to a third straight triple-double from Giannis Antetokounmpo: 31 points, 15 rebounds and 10 assists.

It was the first time in Bucks history that a player recorded a triple-double in three consecutive games.

“It’s not always about scoring,” Antetokounmpo said. “You can manipulate the game in different ways: passing, finding your teammates, putting them in the right spot.”

The two-time NBA Most Valuable Player continues to improve every season, and this season has been no different.

The Bucks have been receiving terrific offensive balance, too, as all nine Milwaukee players who received playing time scored against the Wizards. Khris Middleton added 23 points and Brook Lopez had 22.

“Nobody settled just to get a shot up,” Middleton said. “We realize we have many different matchups we can go to.”

Middleton had been in a bit of shooting slump in recent games. Despite starting 1 of 6 against the Wizards, he just kept shooting and eventually found his rhythm, winding up 9 of 22.

“Sometimes it’s definitely mechanical, sometimes it’s mental,” Middleton said. “The mechanical stuff I think is easy to fix and same with the mental part. After a while, you just tell yourself you’re going to make shots. The percentages are always going to even (themselves) out.”