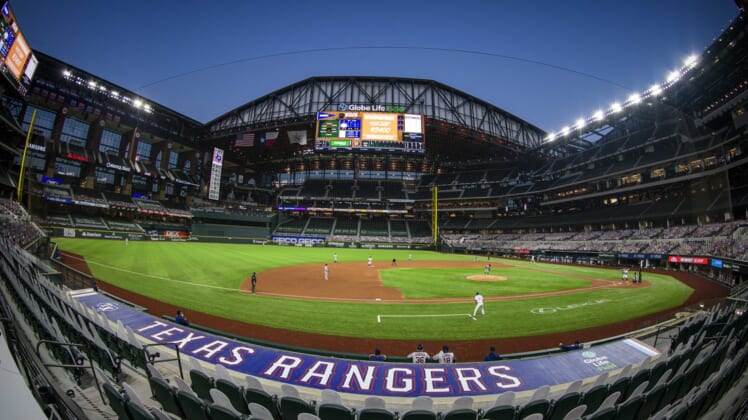 Sep 24, 2020; Arlington, Texas, USA; A view of the field and the open roof during the game between the Texas Rangers and the Houston Astros at Globe Life Field. Mandatory Credit: Jerome Miron-USA TODAY Sports

President Joe Biden disagrees with the Texas Rangers’ plan to open their ballpark to full capacity beginning with their Monday home opener against the Toronto Blue Jays.

The president spoke Wednesday with ESPN about the current state of the COVID-19 pandemic with the baseball season set to start Thursday.

The Rangers are set to be the lone major league team to accept full capacity at their ballpark from the start of the season, meaning 40,300 could be present at Globe Life Field in Arlington, Texas.

“Well, that’s a decision they made. I think it’s a mistake,” Biden said. “They should listen to Dr. (Anthony) Fauci, the scientists and the experts. But I think it’s not responsible.”

Every MLB team will allow access to at least some fans from the start of the season, with the lowest rate of capacity permitted being 12 percent in Boston and Washington.

Biden also addressed the issue of players being fearful about receiving a COVID-19 vaccine.

“I would say I’m President of the United States and I got vaccinated,” he said. “I don’t have an unimportant job. Would I take the vaccine if I thought it was going to hurt me? We have done incredible research on the vaccines and they have shown that they work. We have to get to the point where enough people have taken the vaccine so we diminish the possibility for it to spread. …

“In terms of it being responsible (for stadiums to open at full capacity) — you see what’s happening in Europe now when they lifted the mandates. I don’t know why we don’t just follow the science and beat this — just flat out beat it. We are going to have enough vaccinations, vaccinators. We’ve opened places. We’re doing everything we can to make it clear to people, ‘Get the vaccine as quickly as you can get it.’ By the end of (April), we’re going to be in a position where everyone can get the vaccine.”

The president added that he would “strongly support” an effort by the Major League Baseball Players Association to move the All-Star Game out of Atlanta after Georgia recently passed a controversial voting law that critics believe targets people of color.

Talking about the impact of athletes getting involved in political issues, Biden said: “People look to them. They’re leaders.”