Preds, Flames both look to snap out of losing ways 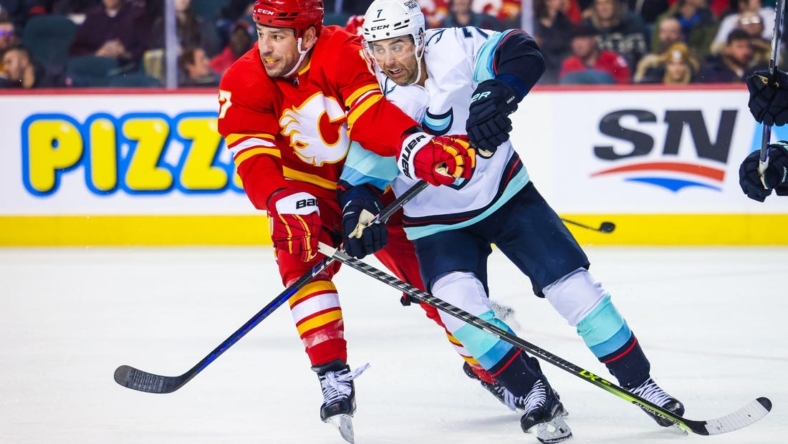 The Calgary Flames are dealing with their first rough patch of the young season. Though it’s not nearly as bad as the rut the Nashville Predators find themselves in.

Looking to avoid a third straight defeat, the Flames will try to hand the visiting Predators an eighth loss in their last nine games on Thursday night.

Calgary opened the season with three straight wins, but has dropped three of five since — all amid its current eight-game home stretch. For a second consecutive contest, the Flames failed to hold on to a third-period lead on Tuesday night. This time, they blew a two-goal edge during the final frame en route to their 5-4 loss versus Seattle.

“These types of situations, we don’t want to have that happen later on in the year,” Calgary forward Nazem Kadri said of his team’s recent third-period struggles.

“That’s still no excuse. We’ve got to bear down and get the job done.”

“It’s kind of the way we’ve been playing all year. Strung some shifts together and kind of make those mistakes and it’s obviously hurting us as a group right now,” said Flames forward Tyler Toffoli, who had a goal and an assist on Tuesday.

“We’re trying to find ourselves as a group right now.”

Perhaps some good news for Calgary is that Nashville has also lost two in a row, and is 1-6-1 since sweeping both games against San Jose in Prague to open this season. The Predators trailed 4-1 after one period on Tuesday night, and fell 7-4 at Edmonton, thus dropping to 0-3-0 on the road in North America on the campaign.

“There were key situations where we’ve got to be able to execute better, or stay out of the penalty box, or whatnot,” Predators coach John Hynes said.

Nashville has allowed 17 goals during its three true road contests this season. Juuse Saros allowed 10 of those goals while facing 57 shots in his two road starts. However, he’s 4-1-0 with a 2.58 goals-against average at Calgary during his career.

With a goal and two assists against the Oilers, Nashville’s Filip Forsberg has recorded seven of his team-leading 10 points in the last four games. He’s posted five goals and three assists during his last seven games versus Calgary.

Kadri scored his fifth goal of the season on Tuesday and leads the team with 10 points. Though Kadri does not have a goal in any of his last five games versus Nashville, all coming with Colorado, he’s recorded seven assists during those contests.

Calgary snapped a 0-1-3 rut against the Predators with a 5-4 overtime victory at Nashville on April 26 of last season. The Predators, though, have won two straight, and five of their last six road games against the Flames.