Preds finally get going on the road, top struggling Flames 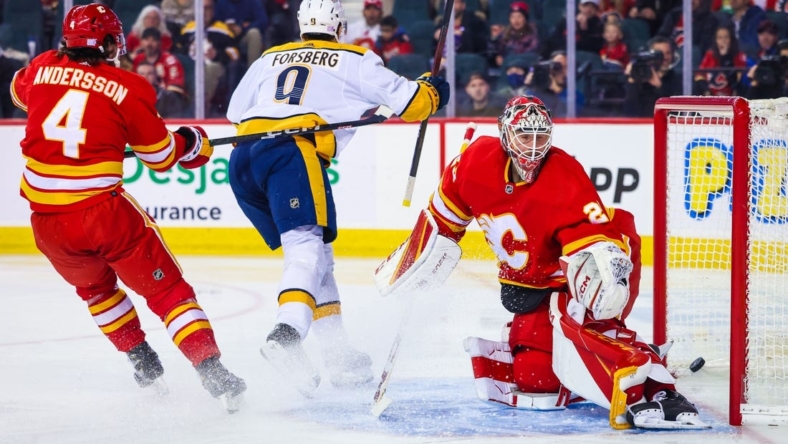 Filip Forsberg and Matt Duchene each had a goal with an assist, and Kevin Lankinen made 29 saves, as the visiting Nashville Predators won for just the second time in nine games, 4-1 over the skidding Calgary Flames on Thursday night.

Forsberg scored 59 seconds into the second period and assisted on Roman Josi’s power-play goal 1:28 later. Meanwhile, ex-Flame Mark Jankowski scored in the first in his season debut and Duchene added an empty-netter for Nashville. Lankinen was solid all night en route to his second win in three starts with his new club — all coming away from home.

After taking two games from San Jose in Prague to open the season, the Predators went 1-6-1 before Thursday’s triumph.

Down 3-0, Calgary finally got on the board 1:43 into the third period, when Blake Coleman beat Lankinen after the netminder’s behind-the-net clearing attempt was intercepted. The Flames recorded the first five shots of the final frame; however, Lankinen regrouped and the Predators’ defense remained stout to record their first victory across four true road contests in North America.

Jacob Markstrom stopped 28 of 31 shots for Calgary, which has dropped three consecutive games — all at home — after winning five of its first six. The Flames are 3-4-0 during an eight-game home stretch.

Nashville played the aggressor most of the first period, outshooting the Flames 12-3. The Predators were eventually rewarded with 28.6 seconds remaining in the opening frame when Jankowski, who spent his first four NHL seasons (2016-20) with Calgary, rang the post in his Nashville debut after totaling five goals and four assists in seven games with Milwaukee of the AHL.

The Predators made it 2-0 when Forsberg took a stretch pass from Duchene, broke free and beat Markstrom over the top of his glove. Less than two minutes later, Josi converted a hard wrister from the blue line.

Nashville killed all three Calgary power-play chances and blocked a whopping 24 shots on the night.