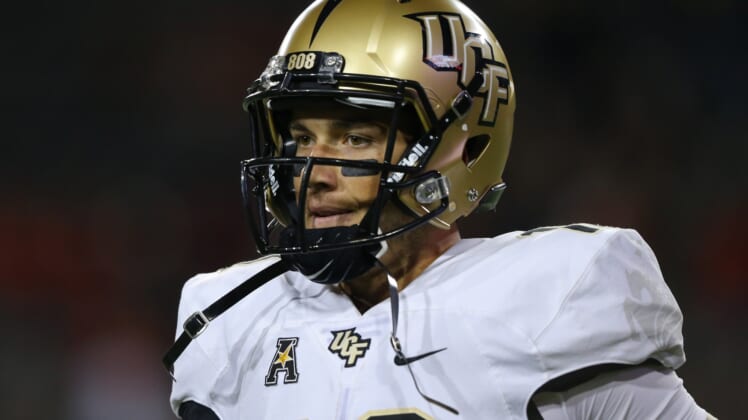 Most college football teams begin conference play in Week 4, and getting off to a strong start is imperative. Some key players will excel, but others will struggle.

Looking at the matchups and factoring in trends, we’ve identified where those standout performances and disappointing days are most likely to happen.

Each player highlighted is considered a primary contributor for his team. Will he live up to expectations or fall short this weekend?

McKenzie Milton had a bit of a disastrous showing when Central Florida last took the field. The junior completed only 53.8 percent of his passes ― his second-lowest clip since 2016 ― and tossed a career-high three interceptions. Although the Knights still rolled an inferior opponent, it was a forgettable outing. Florida Atlantic, though capable of matching UCF’s pace offensively, offers a chance for a rebound. The Owls surrendered 5.7 yards per play to both Air Force and Bethune-Cookman. They’ll be unable to slow Milton during a high-scoring affair.

The future is bright with JT Daniels running the offense. His growing pains are real, however, and they’re a major obstacle for USC to overcome right now. Over the last two contests, the true freshman has mustered just 6.5 yards per attempt with zero touchdowns and three interceptions. It won’t get easier in Week 4, considering Washington State has limited its opponents to a 42.9 completion rate and 4.9 yards per attempt. Perhaps a bit of home cooking will energize the 1-2 Trojans defensively, but Daniels will encounter another difficult test.

Rashan Gary is worth every bit of the attention he’s received both as a college player and NFL prospect. Chase Winovich, though, is offering yet another reminder of his elite talent. Through three games, the defensive end has recorded 21 total tackles with 6.5 for loss. His ability to recognize run or pass and set the edge has consistently been on display. That prowess will be essential if dual-threat quarterback Adrian Martinez starts for the Cornhuskers. Either way, Winovich will be a regular sight in the backfield because of Nebraska’s shaky offensive line.

The moment an offense tested Missouri’s defense, the unit collapsed. Purdue racked up 614 yards. Fortunately for the Tigers, Drew Lock and the offense atoned for that letdown and amassed 608 yards of their own during a 40-37 win. But it’s extremely improbable they’re able to repeat that opposite Georgia, the nation’s No. 7 defense. Since the Bulldogs should score early and often, Missouri may abandon the running game and leave the outcome in Lock’s hands. That’s a fine strategy, but it’ll be a challenge for the senior to avoid a few costly mistakes with that volume.

Alabama limited Ole Miss to 133 yards on seven completions in Week 3. This explosive passing game is ready to burst. Kent State will be the unfortunate recipient of the Rebels being motivated to excel, and D.K. Metcalf will resume his breakout season in the process. Despite the loss to the Crimson Tide, he accounted for 92 of those 122 yards. Metcalf has recorded 80-plus yards and caught a touchdown in all three contests this year. Plus, since the defense is a wreck, the Rebels probably won’t feel comfortable until they’ve scored 40 points. Metcalf has 150-yard upside.

Wake Forest appears to have found its long-term answer at quarterback. Sam Hartman, a true freshman, has flashed real promise in three starts. That’s why Wake Forest is sticking with him despite the return of Kendall Hinton, who initially was expected to start following his suspension. Given all of that, it should be a reminder to not panic if Hartman labors to move the ball opposite Notre Dame. The Irish have several questions to answer on offense, but its secondary has allowed only 5.9 yards per attempt while intercepting four passes this season.

After spending most of the 2017 season as a running back, Malcolm Perry shifted under center for the Midshipmen and put together a breakout game. He shredded SMU for 282 yards and four touchdowns, lifting Navy to a 43-40 triumph. Guess who Perry gets to face this Saturday? SMU’s run defense hasn’t improved much, surrendering 430 rushing yards combined in the last two contests to TCU and Michigan. Perry, meanwhile, has reached the 100-yard plateau three times and peaked at 223. Expect another enormous day from him.

In Week 2, Kellen Mond surprised much of the college football world and threw for 430 yards with three touchdowns on Clemson’s vaunted defense. Surely he could do the same opposite another elite group, right? Well, the Crimson Tide limited an Ole Miss scoring attack then averaging 407.5 yards to 133. It seems foolish to anticipate Mond will achieve substantially greater success. That would require enormous faith in a sophomore-filled receiving group to thrive when taking on an elite secondary. Mond is a talented quarterback, but he’s not a miracle-worker.

The breakout game from Travis Etienne finally arrived in Week 3. During a 38-7 win over Georgia Southern, the speedster rattled off 162 yards and two touchdowns. His production isn’t the only reason for a lofty projection, though. Kelly Bryant says he’s 100-percent healthy, but Clemson would be wise to limit the hits the dual-threat quarterback absorbs. If that results in more snaps for Trevor Lawrence, a pro-style passer, the Tigers will lean on Etienne to provide the rushing attack. Georgia Tech’s average run defense won’t be able to stop him.

In two outings with FBS opponents, Florida State has been outscored 54-10. Deondre Francois has accounted for one touchdown (rushing) with four interceptions during those two losses, and concern is beginning to mount in Tallahassee. Although the Seminoles should manage to hold off Northern Illinois on the scoreboard, consistently protecting Francois is a different story. The blocking unit has already given up 27 tackles for loss and 10 sacks this season. Francois will be under constant pressure once again in a low-scoring battle.

Malik Rosier’s accuracy remains a concern for the Hurricanes, but he’s fortunate to have a playmaker in Jeff Thomas hiding some of that issue. The speedy sophomore eclipsed 100 yards against both LSU and Toledo, also catching a 67-yard touchdown opposite Savannah State. Thomas has consistently showed out as Miami’s top offensive weapon. The ‘Canes also utilize his speed as a kick returner and occasionally on punts, so he’ll receive plenty of touches against Florida International. The cross-town foe will struggle to contain the elusive Thomas.

Texas recorded a much-needed victory and trounced USC 37-14 last week. Sam Ehlinger posted 223 yards and two touchdowns through the air, adding 35 yards and another score on the ground. But he’s set to encounter far more resistance when the Longhorns travel to TCU, which has ceded only 5.9 yards per pass attempt. Ohio State quarterback Dwayne Haskins played well against the Horned Frogs, yet Ehlinger hasn’t showed that level of ability. Texas desperately needs him to have a career day to have a realistic opportunity at an upset.

The season-ending knee injury to Rodney Anderson will eventually affect Oklahoma’s offense, but those moments aren’t arriving Saturday. When Army traveled to Duke earlier this season, the Black Knights surrendered 5.3 yards per carry and three touchdowns. Trey Sermon, who scampered for 74 yards in Oklahoma’s victory over Iowa State, is primed to have a massive day. Last season, he piled up 90-plus yards three times when serving as a featured back before Anderson’s emergence. Sermon will help the Sooners breeze past Army in Norman.

Tennessee’s expected reliance on the running game in Week 4 is two-fold. The Vols have amassed 664 yards and eight touchdowns on the ground through three games. That’s really good! Plus, defending the run is a major area of concern for Florida, which ceded 303 rushing yards in a loss to Kentucky. Tennessee would be unwise to not test the Gators that way. The matchup between Jarrett Guarantano and the UF secondary isn’t favorable, anyway. The Vols must try to remove as much pressure from his right arm, and a run-first approach will limit his production.

In two games against FBS competition, Texas Tech has surrendered 590.5 yards and 48 points per game. Oklahoma State is averaging 590.3 yards and 52.3 points so far. You see where this is headed, right? Taylor Cornelius simply needs to be a reliable distributor for the Cowboys to have an enormous day. He has big-play weapons in Tylan Wallace and Tyron Johnson and steady possession receivers in Dillon Stoner and Jalen McCleskey. As long as Cornelius puts them in position to create after the catch, his stat line will be rewarded quite nicely.

Since he arrived at Wisconsin, Jonathan Taylor has only failed to reach five yards per carry three times. In those games, the Badgers are 1-2. Barring a complete meltdown, he’s probably not going to surpass the mark Saturday at Kinnick Stadium. Iowa enters the Big Ten showdown as the nation’s No. 3 run defense at 1.5 yards allowed per carry. While Wisconsin has a terrific offensive line, the Hawkeyes boast a similarly talented front seven. The Badgers, as they should, will try to establish Taylor early, but he’ll consistently find little room to operate.

The nation’s leader in touchdown passes, Cole McDonald posted season-low marks with a 62.5 completion percentage and only two scores in a 28-21 loss at Army. Yeah, we’re not exactly concerned about the breakout sophomore. McDonald is averaging 371.5 yards through four games, and Duquense has allowed consecutive 200-yard passers at the FCS level. Wide receivers John Ursua and Cedric Byrd should overwhelm the visitors. Given the trials of Hawaii’s defense, it might take 50 points for McDonald and Co. to reach blowout territory.

Although he’s off to a commendable start in 2018, Manny Wilkins is preparing for a demanding task. The Sun Devils have mustered only 80 rushing yards over the last two games, and Washington rarely allows success on the ground. That will force Wilkins to beat the Huskies through the air, and the secondary is even tougher to beat. Washington has limited its three opponents to a combined 4.7 yards per pass attempt and 512 total yards. ASU receiver N’Keal Harry is a legitimate star, but he and Wilkins must be absolutely perfect to pick apart the Dawgs.