Predicting outcome for every Notre Dame game this season 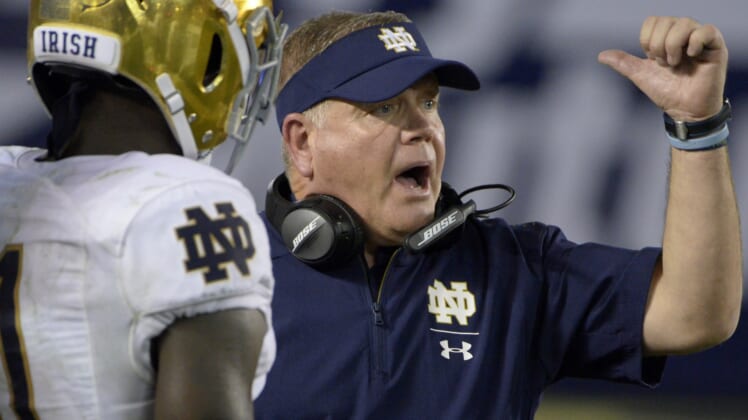 Notre Dame’s surprising 2018 season came to an end in blowout fashion against the Clemson Tigers in the semifinals.

This doesn’t take anything away from what was a stellar season for Brian Kelly’s squad. Notre Dame now heads into the 2019 campaign as a consensus top-15 team with legit playoff expectations.

It’s not going to be easy for stud quarterback Ian Book and Co. The Irish have difficult games against fellow playoff contenders in that of Georgia and Michigan on the road. They must also take on USC, Virginia Tech, Duke and Stanford.

Here, we predict every game on Notre Dame’s schedule heading into the season.

The Cardinals finished last season with a downright horrible 2-10 record. It led to the firing of Bobby Petrino, who was ultimately replaced by Scott Satterfield. Despite a change of culture, the talent just isn’t there for Louisville to compete with the big boys.

Notre Dame will be aided by veterans Ian Book and Jafar Armstrong in the backfield. That should make up for what promises to be a hostile environment at Cardinal Stadium.

Like pretty much every powerhouse, Notre Dame has a couple of cupcakes on its schedule. That includes a mid-major program in New Mexico who finished last season with just three wins.

This is not going to be a competitive game. But interestingly enough, the Lobos are led by former Irish head coach Bob Davie. That makes for a cool storyline in Notre Dame’s home debut.

Given how competitive the SEC is going to be this season, Georgia’s home outing against Notre Dame might ultimately be an elimination game for both teams in their hopes of earning a playoff spot. Outside of the hostile environment at Sanford Stadium, these Bulldogs are absolutely stacked.

Can Notre Dame do enough to stop the likes of Jake Fromm, D’Andre Swift and Jeremiah Holloman? We’re not too sure. What we do know is that the onus is going to be on Book and Co. to keep up. That seems to be an unlikely scenario against one of the nation’s best teams.

The Cavaliers surprised a lot of people with an 8-5 record and wins against the likes of Miami (F) and South Carolina last season. This is not going to be an easy matchup for Notre Dame, especially if Brian Kelly’s squad drops the previous game against Georgia.

With that said, the Irish having home-field advantage in this game has to be considered the difference maker. Virginia was 1-4 away from Scott Stadium last season.

The second of two cupcake games on Notre Dame’s schedule, Bowling Green finished last season with a 3-9 record. That included losing by a combined 111 points in three games against Power-Five schools. Yeah, this is not going to go well for the Falcons.

Look for Book, Armstrong and Chase Claypool to absolutely dominate lesser competition ahead of a rivalry game to follow. It’s not going to be pretty.

Clay Helton has a major task ahead of himself after a disastrous 2018 campaign in Southern California. The Trojans won five games, finishing under .500 for just the second time since 2000. USC’s struggles included a loss to Notre Dame in the season finale.

The question here is two-fold. Can a young Trojans team come into South Bend and go tit-for-tat with a more proven Irish squad? Can J.T. Daniels turn the corner as a sophomore? We’ll find out under the lights at Notre Dame Stadium. But don’t bank on it.

Here’s yet another game that could disqualify a top-end title contender from the playoff. Michigan has lost against Notre Dame each of the past two seasons, with both games coming earlier in the season. It’s interesting to note in that Jim Harbaugh-led Wolverines squads have gotten off to slow starts in recent seasons before picking it up big time.

With this game slated to kick off the second half of the season, Michigan could be in a better position. Playing at the Big House is going to help, too. We’re going to predict that quarterback Shea Patterson and Co. exact revenge against Notre Dame, pretty much eliminating the Irish from playoff contention.

This season isn’t going to be much different. Willis returns after leading Tech to a pedestrian 6-7 record last season. Tech also lost last season’s leading rusher and three key defenders from 2018. It’s a year of transition in Blacksburg, and that’s going to lead to another loss against the Irish.

We have to give David Cutcliffe credit for turning a previous dormant Blue Devils football program into a competitive team. Duke has now made it to a bowl game six of the past seven seasons after playing postseason football just once from 1994-2011.

Unfortunately, this season is going to be one of transition in Durham. Rookie first-round pick Daniel Jones will be replaced by Quentin Harris under center. Meanwhile, Duke lost its best defender in that of Joe Giles-Harris to the NFL. While still competitive, we’re not expecting Duke to hang with the big boys like Notre Dame.

The Midshipmen are coming off a 3-10 2018 season, their worst mark in Ken Niumatalolo‘s 11 seasons as the program’s head coach. That included a 22-point loss to Notre Dame.

With this game set to take place at Notre Dame Stadium in South Bend, there’s no reasonable expectation that Navy will be competitive. It ranked 103rd in scoring defense and 96th in scoring offense last season. There’s just too large of a talent gap here.

The Eagles lost their final three games last season, ending a campaign that had seen them ranked in the top 25. That’s the bad news. The good news? Boston College returns leading rusher AJ Dillon from a season ago. It also returns a solid quarterback in Anthony Brown.

These two should help Boston College remain competitive as it is forced to take on three potential top-25 teams over the final month of the season. Unfortunately for the Eagles, that will matter little on the road during senior day against Notre Dame.

K.J. Costello returning for his senior season should help an otherwise young Cardinal team remain competitive. However, the quarterback did lose his leading rusher (Bryce Love) and leading pass catchers (JJ Arcega-Whiteside and Kaden Smith) to the NFL Draft. That’s going to be a major issue.

The good news for Stanford is that this game comes late in the season. Any lack of experience will be covered up a tad. With that said, Stanford simply lacks the top-end and proven talent to keep up with the Irish.