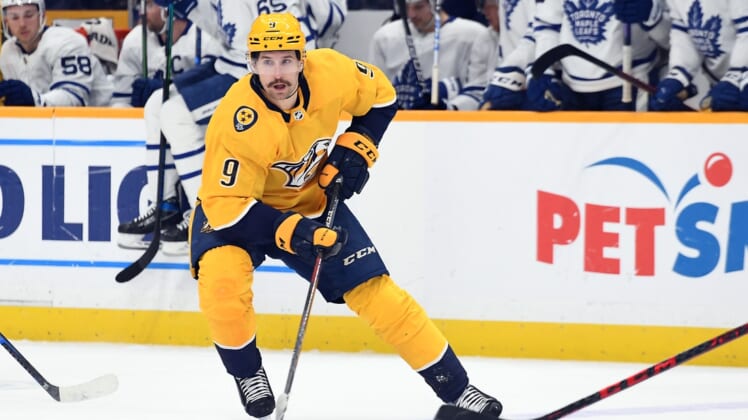 The Nashville Predators’ offense has been on fire, and they look to keep it going Monday when they visit the Anaheim Ducks.

Nashville is 6-2-0 over its last eight games, outscoring opponents by a 38-20 margin. The latest victory came Saturday, when six different Predators players had multipoint performances in a 6-3 win over the Toronto Maple Leafs.

Filip Forsberg’s power-play goal in the third period was the game-winner, and it was his 211th career goal in a Predators uniform, making him the franchise’s all-time scoring leader. David Legwand held the previous mark.

“It’s been a great ride so far,” Forsberg said of his 10 seasons in Nashville. “I played with Leggy (Legwand) for a little bit, so it’s obviously cool. On the ice, my first point was his 200th goal, so I’ve come a long way since then.”

Roman Josi also made some history, joining Bobby Orr as the only defensemen in NHL history to tally at least three points over four consecutive games. Orr’s three-point streak extended to six games in 1970-71.

In a sign of how hot Nashville’s offense is running, Josi isn’t even the only player on a nine-game points streak. Matt Duchene is on a similar string, with 17 points (nine goals, eight assists) over his nine games.

The Predators hold the top Western Conference wild-card berth and are battling with the St. Louis Blues and Minnesota Wild for second and third place in the Central Division.

The Predators added reinforcements prior to Monday afternoon’s trade deadline, acquiring Jeremy Lauzon from the Seattle Kraken on Sunday in exchange for a second-round pick in the 2022 draft.

While Nashville is adding, the Ducks might have made even more roster subtractions by the time the puck drops on Monday evening.

“Our goal is to continue building a team that can compete for the Stanley Cup for the long haul,” Ducks general manager Pat Verbeek said in a statement following the trade that sent Lindholm and Kodie Curran to the Boston Bruins. “Adding players and assets that fit in the age group of our existing younger talent sets us up well for the future.”

The Ducks are on a season-high six-game (0-4-2) winless streak, a drought that includes their last meeting with the Predators, a 4-1 loss in Nashville on March 10. They have won just four of their last 17 games (4-10-3).

Returning home Friday after an 0-3-2 road trip, the Ducks were blanked 3-0 by the Florida Panthers for their second shutout loss of the season.

John Gibson has struggled to a 2-8-2 record and .856 save percentage over his last 12 games. Gibson has started Anaheim’s last three games in net, but the Ducks could opt to start Anthony Stolarz on Monday to give Gibson some time to regroup.

Since the Predators also play the Los Angeles Kings on Tuesday, goaltenders Juuse Saros and David Rittich figure to split the back-to-back starts.