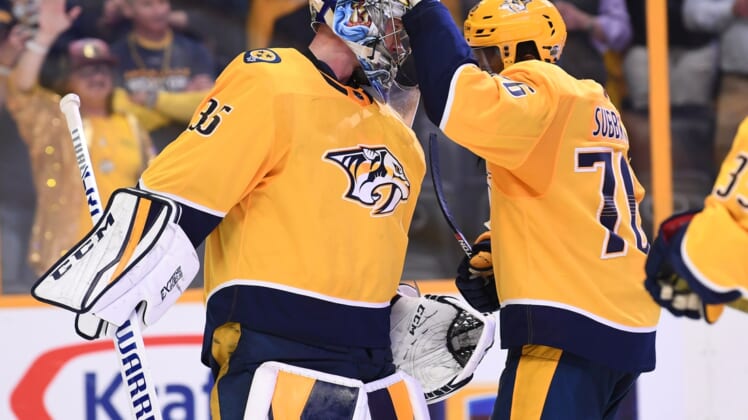 Apr 12, 2018; Nashville, TN, USA; Nashville Predators goalie Pekka Rinne (35) is congratulated by Nashville Predators defenseman P.K. Subban (76) after a win against the Colorado Avalanche in game one of the first round of the 2018 Stanley Cup Playoffs at Bridgestone Arena. Mandatory Credit: Christopher Hanewinckel-USA TODAY Sports

The Nashville Predators’ Pekka Rinne was chosen the winner of the NHL’s King Clancy Memorial Trophy on Monday, the first Predators player to receive the award, which is based on humanitarian and leadership contributions made to a player’s community.

Rinne was one of three finalists alongside the New Jersey Devils’ P.K. Subban and the San Jose Sharks’ Kurtis Gabriel.

Rebecca King, the Predators’ vice president of community relations, said in a statement that “everything Pekka does comes from the heart. Bringing joy to others is what he is perhaps most passionate about. He is the most humble and kind-hearted person you will ever meet, and his connection with everyone he comes across is so incredibly genuine.”

Rinne, who has spent his entire 15-year NHL career with the Predators, has done the bulk of his community work through the 365 Pediatric Cancer Fund, which he and former teammate Shea Weber founded. The NHL donated $25,000 to the 365 Fund in connection with Rinne receiving the King Clancy award.

Weber, a 16-year NHL veteran, played his first 11 seasons in Nashville before being traded to Montreal in June 2016, and he has played for the Canadiens since.

“After spending 15 years with the same organization and in the same city, and with the opportunities I’ve had through local charities in my community, this is very special to me,” Rinne said, adding his thanks to Weber and his congratulations to Subban and Gabriel. The other two nominees have had donations of $5,000 made in their names.

“This award means a lot to me and my family, and it’s a huge honor,” said Rinne, a first-time finalist for the award.

Rinne, who won the Vezina Trophy as the league’s top goaltender for the 2017-18 season, has a 369 wins and 60 shutouts in 683 games, each the most in Nashville history, since the Predators made him the 258th player taken overall (eighth round) in the 2004 NHL Draft.