Predators look to keep playing at ‘top level’ vs. Senators 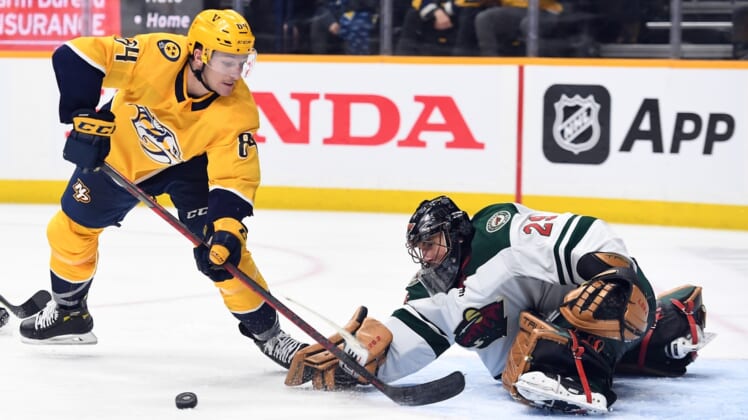 The Nashville Predators look to strengthen their hold on the Western Conference’s top wild-card slot on Thursday when they visit the Ottawa Senators.

The Predators (40-25-4, 84 points) hold that spot with the Vegas Golden Knights and Dallas Stars in hot pursuit. The security of a top-three division finish is also still possible for Nashville, as the Predators are within reach of the second-place Minnesota Wild and third-place St. Louis Blues.

Nashville narrowed the gap on Minnesota with a 6-2 victory over the Wild on Tuesday.

Although Minnesota outshot the Predators by a 49-33 margin, Juuse Saros made 47 saves and Nashville skaters recorded 22 blocked shots.

The Predators went 3-for-4 on the power play while thwarting five of six man-advantage chances for the Wild. All three of Nashville’s goals with the man advantage came in the first period, tying a team record for most power-play goals in a single session.

“We knew coming in it was going to be a playoff game,” said forward Matt Duchene, who had a goal and an assist.

“We thrive on hard, fast, competitive hockey … meaningful hockey I think. We’re a team that, earlier in the year, some of the top teams were beating us a little bit,” Duchene said. “We addressed it, and talked about it, and I think since then, it’s been the ability just to get our game up to the top level. That’s us in a nutshell (Tuesday).”

Saros boasts a .921 save percentage and 2.56 goals-against average. He is also among the league leaders in games played (58), and is likely to start again Thursday.

Captain Roman Josi has 84 points, putting him one shy of matching the Nashville single-season franchise record. Paul Kariya established the milestone with 85 points in the 2005-06 season.

The Predators have won eight of the last 11 meetings with the Senators, including a recent 4-1 victory on March 29.

Ottawa (26-37-6, 58 points) rebounded from that defeat with their first three-game regulation winning streak of the season. The latest victory was a 6-3 road win over the Montreal Canadiens on Tuesday.

With the game tied at 3-3 entering the third period, the Senators scored three unanswered goals, beginning with Drake Batherson’s power-play tally just 29 seconds into the frame.

“Especially start of a period sometimes … a lot of times you lose momentum if you don’t do anything with that power play,” Senators coach D.J. Smith said. “They went right to what the game plan was and they put it in the back of the net. That changes the game. You could see some maturity from those guys. When they get on a power play, they’re dangerous.”

Ottawa is 8-for-28 on power plays over its last nine games.

Anton Forsberg, who stopped 27 of 30 shots Tuesday, is the Senators’ probable starter against Nashville.