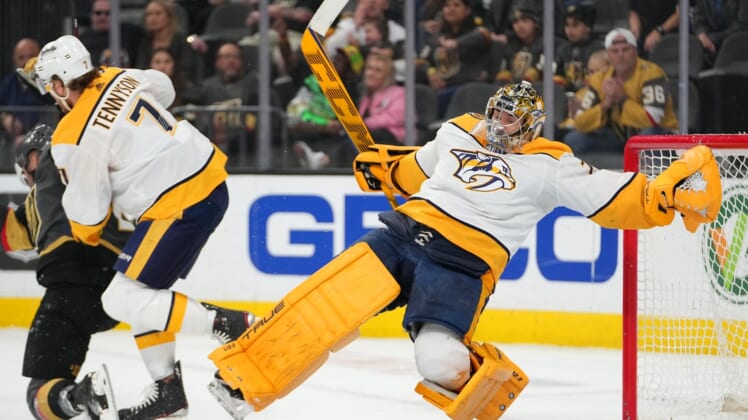 Following consecutive 6-1 defeats on the road against Los Angeles and Vegas, the Predators return home to face the Philadelphia Flyers on Sunday night.

Despite the defeats, Nashville entered the weekend atop the Western Conference wild-card race.

The Predators opened their three-game trip with a 6-3 victory at Anaheim, with Filip Forsberg collecting two goals and three assists.

“We’ve got to be honest with ourselves,” Predators captain Roman Josi said. “It just hasn’t been good enough the last couple of games, and they’re huge games. L.A. is right there with us, Vegas is right behind us. We knew it was going to be a big game and two huge points, and we came out flat (Thursday in Vegas) and came out flat in L.A. — and that just can’t happen. So, I think we’ve got to be honest with ourselves and look at things we can do better and just get better going forward.”

Forsberg scored the lone Nashville goal against the Golden Knights off an assist from Josi, who extended his assist streak to nine games and point streak to 12 contests (four goals, 22 assists).

Nashville was shorthanded on Thursday.

Rookie forward Tanner Jeannot participated in pregame warmups but departed shortly thereafter to be with his wife for the birth of their first child.

The Flyers are coming off a 6-3 loss Friday at Colorado, a game in which goaltender Carter Hart was pelted with 51 shots.

“We know they’re a good team. They came out hard and fast,” Hart said. “They were just all over us. Just had to battle through it.”

“I’ll say we were due, that’s for sure,” said Philadelphia interim coach Mike Yeo, whose team concludes its five-game trip Tuesday against Minnesota.

“But you know, especially considering we played a lot of really good road games, we just haven’t always gotten wins.”

The Flyers played Friday without Travis Konecny (lower body), who was a late scratch. Fellow forward Oskar Lindblom returned after missing the previous game with an undisclosed injury.

Flyers center Nate Thompson has been cleared to play after being sidelined since late November following shoulder surgery.

“Great news for us,” Yeo said. “Definitely looking forward to getting him back.”