Predators, Lightning meet with work left to do 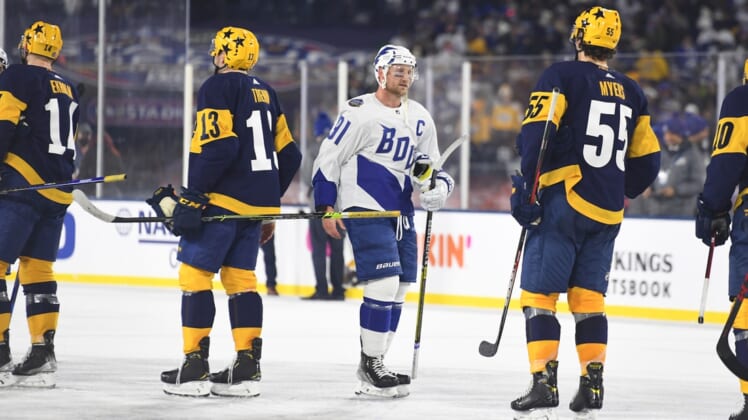 The Nashville Predators and Tampa Bay Lightning have plenty at stake when they conclude their season series Saturday night in Florida.

In the teams’ second matchup this season, playoff security and positioning are at the forefront in the interconference contest.

On Feb. 26 in the first ever NHL Stadium Series matchup to take place at Nashville, Tenn., the Lightning turned to captain Steven Stamkos, who had three points as Tampa Bay prevailed 3-2 at the home stadium of the NFL’s Tennessee Titans.

The final meeting Saturday night will not force the teams to consider outdoor conditions, but will have more significance attached.

The Lightning (47-22-8, 102 points) have locked down a spot in the Stanley Cup playoffs and are looking to three-peat as league champions.

However, a rough go of it in March, when coach Jon Cooper’s squad went 8-7-0, has slotted the Lightning into third place in the Atlantic Division, behind leader Florida and second-place Toronto.

With five regular-season games remaining, the Lightning are just three points ahead of the Pittsburgh Penguins and Boston Bruins, who have been jockeying for third in their respective divisions. At least one of those three clubs will occupy a wild-card spot and face a division winner when the postseason begins.

The Lightning did their best Thursday night to maintain third place over Atlantic Division foe Boston, which was blanked 4-0 by the Penguins.

Following a scoreless first period Thursday, Tampa Bay poured it on against the Toronto Maple Leafs, scoring four goals in each of the remaining frames for an 8-1 victory. It brought the Lightning within six points of second-place Toronto.

The Lightning received three-point showings from Alex Killorn (two goals), Ross Colton (two goals), Stamkos (one goal) and Ondrej Palat (one goal), plus a 36-save performance from Andrei Vasilevskiy (36-18-5).

Stamkos’ four straight multipoint games helped him set the franchise record for career points with 956, eclipsing Martin St. Louis’ mark of 953. The captain now has 473 goals and 483 assists over 14 seasons with Tampa Bay.

“It’s crazy the production he’s had,” said Lightning defenseman Victor Hedman. “He has been phenomenal (and) the games that he’s missed and he’s still only (32)-years-old and has that record already. Says a lot about his determination, his skill level.”

Nashville (44-28-5, 93 points) holds the Western Conference’s top wild-card spot, but that advantage is only two points over the No. 2 wild-card Dallas Stars and four over the Vegas Golden Knights, the first club outside of a playoff position.

Already with a game in hand over those two teams, the Predators could pad their advantage with a victory at Tampa.

Nashville, which is 3-3-1 over the past seven games, won its last time on the ice, earning a 3-2 shootout home win over the Pacific-leading Calgary Flames on Tuesday, while securing the extra point for the two-point edge over the Stars.

Mikael Granlund notched the only shootout marker, and goalie Juuse Saros improved his record to 38-24-3 in the victory.

“I think when you come down the stretch like this, you’ve got to play meaningful hockey,” said Predators coach John Hynes. “It’s what this time of year is about.”

Matt Duchene skated in his 900th career game and scored his 40th goal to become the first 40-goal scorer in Nashville history.