Predators in full roar ahead of visit to Kings 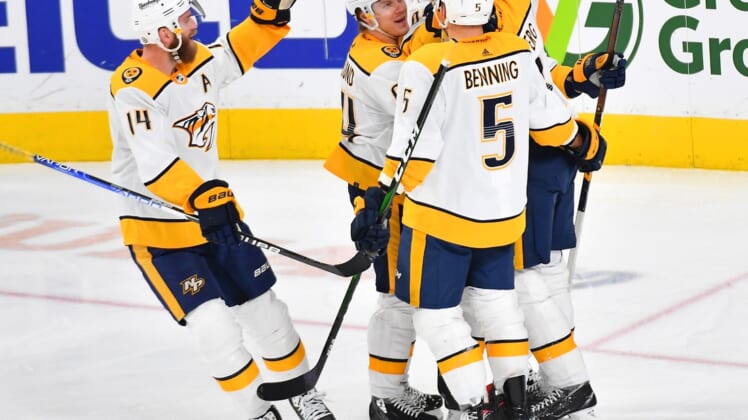 As good as the Los Angeles Kings have looked over the last month, the Nashville Predators have been even better.

Victorious in nine of 11 and looking for a third straight victory, the visiting Predators will also try to keep the Kings from winning three in a row on Thursday night.

Since Dec. 4, Nashville is 9-1-1, including a strong 6-1-1 on the road. The Predators led 3-0 early in the third period at Vegas on Tuesday, then held on for a 3-2 victory in the opener of their three-game western trip.

Nashville’s last seven road contests have been decided by one or two goals.

“It was a huge game for us,” said the Predators’ Yakov Trenin, who has two goals with two assists over his last four games. “Get the win and start the road trip on a good note.”

Nashville’s Filip Forsberg scored twice Tuesday, increasing his team-leading goal total to 17. He has scored six of those goals, with 11 points, over his last eight games for the Predators, who are in the mix for the top spot in the tight Western Conference.

Nashville goalie Juuse Saros made a season-high 41 saves Tuesday. Among the NHL leaders with 17 wins, Saros has a 1.81 goals-against average and .940 save percentage while winning nine of his last 11 starts.

“Obviously, we’re playing really hard in front of (Saros) and we’re doing a lot of good things,” Forsberg said. “But, I mean (he’s) just the best goalie in the league, and we’re really lucky to have him.”

Saros, who has started 27 of the Predators’ 34 games this season, stopped 25 shots as they beat Los Angeles for the eighth time in nine meetings, 2-1 at home on Oct. 19. Nashville’s Tanner Jeannot scored one of his 10 goals in that contest, but he’s been held without a point in his last two road games.

Los Angeles returns to the ice for the first time since a 6-3 New Year’s Day home win over Philadelphia — the sixth victory in its last nine games overall. The Kings have also won four of their last five at home.

“It was ticking (versus Philadelphia), and we want to keep it going,” said the Kings’ Phillip Danault, who had a goal with two assists against the Flyers.

Los Angeles goalie Jonathan Quick recorded 34 saves against the Flyers, but he has allowed 14 goals over his last four starts. He’s posted a 3.57 goals-against average during a four-game losing streak to the Predators, but last faced them in March 2019.

Anze Kopitar scored Los Angeles’ lone goal against the Predators this season. He has a goal with four assists in his last seven games overall, and 19 points (five goals, 14 assists) in his last 19 versus Nashville.