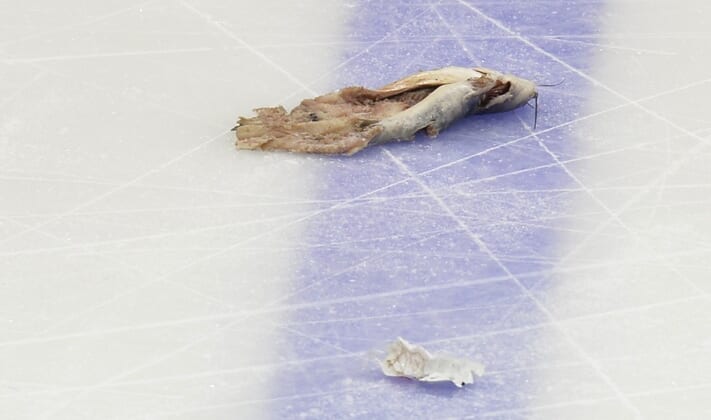 A Nashville Predators fan, Jacob Waddell tossed a dead catfish onto the ice during Game 1 of the Stanley Cup Final between the Predators and Pittsburgh Penguins. Now he’s facing criminal charges for his actions, per CBS 2 in Pittsburgh.

After tossing the dead fish onto the ice, the fan, Jacob Waddell, was immediately ejected from the contest.

So this dude just got kicked out of Game 1 of the Stanley Cup Final for throwing a catfish on the ice. pic.twitter.com/DzLK6l1Mv5

Now he’s being charged with disorderly conduct, disrupting a meeting and possessing instruments of a crime.

If this had been done during a Predators home game, Waddell would have been just one of many to throw a catfish onto the ice, as it’s become quite a tradition in Nashville. But doing it on the road might prove costly to this loyal fan, who, if convicted on all counts could face up to six years in jail.

No doubt he’s a Nashville hero, even if his attempt at sparking a rally fell short. Pittsburgh ended up winning the game, 5-3.