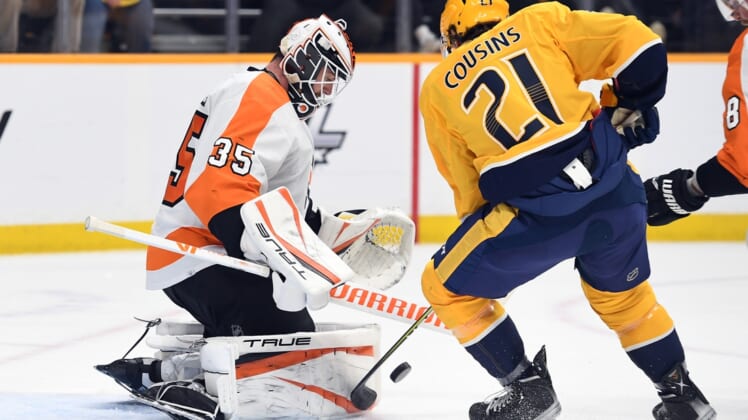 Tanner Jeannot scored the go-ahead goal with 1:19 remaining as the Nashville Predators rallied from a two-goal deficit to defeat the visiting Philadelphia Flyers 5-4 Sunday.

Jeannot, a rookie who missed the previous game to be with his wife for the birth of their first child, had a Gordie Howe hat trick — a goal, two assists and a fight. His winner came when he redirected Roman Josi’s shot from the left point into the upper right corner of the net.

Travis Sanheim, Joel Farabee, Max Willman and James van Riemsdyk scored for the Flyers, who lost for the 15th time in their past 16 road games (1-13-2). Martin Jones stopped 30 of 35 shots.

The Flyers took a 2-0 lead after one period despite being outshot 14-4.

They opened the scoring just 2:15 in as Morgan Frost stole the puck in Nashville’s end and dropped a pass for Sanheim, whose wrist shot from the left faceoff circle found the far upper corner of the net.

The Flyers made it 2-0 at 17:27 as Farabee found a loose puck in the slot and scored on a backhander.

The Predators got on the board just 41 seconds into the second as Josi’s shot from the blue line was tipped in by Trenin.

Philadelphia restored its two-goal edge at 2:23 on Willman’s unassisted goal after he blocked a shot in his own end, then flipped the puck over a defenseman stick to set himself up for a breakaway.

Trenin scored his second at 7:26, finishing off a two-on-one break with Mikael Granlund to spark a three-goal rally by the Predators.

Kunin tallied at 8:12 off his own rebound and Forsberg redirected Alexandre Carrier’s point shot at 18:13 to give Nashville its first lead at 4-3.

With less than a minute left in the second period, van Riemsdyk scored on a one-timer from the top of the left faceoff circle to send the game to the third period tied at 4-4.