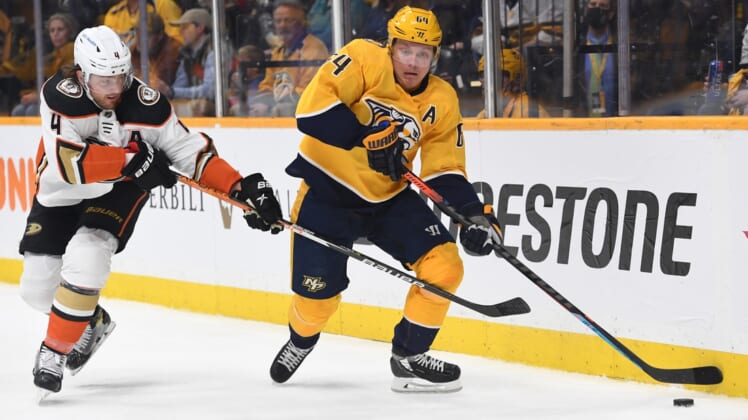 Matt Duchene had two goals and an assist to lead the Nashville Predators to a 4-1 win against the visiting Anaheim Ducks on Thursday night.

Filip Forsberg had a goal and two assists, Colton Sissons also scored, and Juuse Saros made 27 saves for the Predators, who have won five of seven following a four-game losing streak.

Saros has allowed two goals in the three-game winning streak for Nashville.

Adam Henrique scored, and John Gibson made 26 saves for Anaheim in the second game of their five-game road trip.

Gibson had been removed three times in eight starts since representing the Pacific Division in the All-Star Game on Feb. 5, including an 8-3 loss to the Chicago Blackhawks in the opener of the road trip on Tuesday.

Duchene scored from in close on a power play to give the Predators a 1-0 lead at 10:53 of the first period.

Mikael Granlund made a pass through the slot to Forsberg, who sent a one-timer pass to Duchene near the opposite post. He had time to stop the puck and then push it past Gibson for his 28th goal of the season.

Tanner Jeannot appeared to give Nashville a 2-0 lead later in the opening period, but his goal was disallowed after Anaheim requested an offsides review.

Michael McCarron also was awarded a goal for Nashville, but a review determined the puck had hit the crossbar, again keeping the score 1-0.

The Predators finally made it 2-0 for good when Duchene made a short pass to Forsberg and he scored on the one-timer at 11:41 of the second period.

Henrique prevented Saros from recording his second shutout in three games and fourth of the season when he scored at 14:14 of the third period to make it 2-1.

Sissons re-established the two-goal lead when he scored with 2:30 left to make it 3-1.

Duchene scored into an empty net to make it 4-1 with 1:41 remaining.

The Ducks were without forwards Ryan Getzlaf, Trevor Zegras, Jakob Silfverberg and Isac Lundestrom because of injuries, and Sam Steel left in the closing minutes after taking a puck to the face.