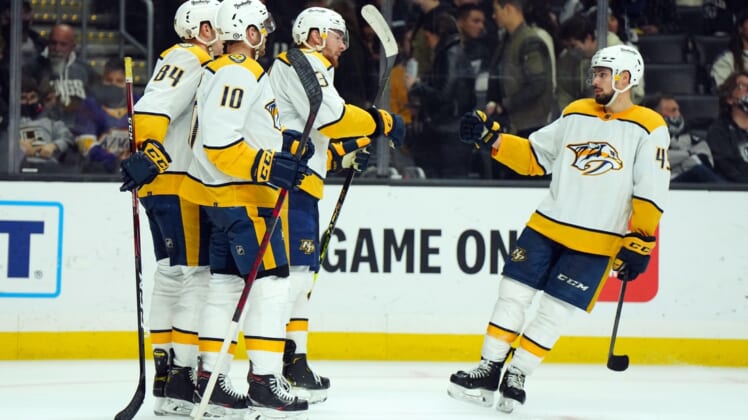 Roman Josi collected one goal and an assist to lead the Nashville Predators to their fourth consecutive win with a 4-2 road victory over the Arizona Coyotes on Saturday.

Mattias Ekholm, Yakov Trenin and Tanner Jeannot all scored first-period goals while Ryan Johansen added two assists for the Predators, who are on an 11-1-1 run. Goaltender Juuse Saros made 37 saves to cap a perfect three-game road trip.

Ekholm opened the scoring 56 seconds into the chippy, penalty-filled clash on his team’s first offensive chance. Luke Kunin’s shot from the slot during an odd-man rush was stopped, but Ekholm drove to the net and converted the loose puck before crashing into the cage himself for his second goal of the season.

Trenin’s ninth goal of the campaign doubled the lead with 2:40 remaining in the opening frame. During four-on-four play, Trenin gained the puck at the top of the right circle and fired a perfect shot inside the far post behind a screened Vejmelka.

Jeannot potted his 11th goal of the season 96 seconds later to make it a 3-0 affair. He raced to the far post and had no trouble redirecting Matt Duchene’s seeing-eye cross-ice pass.

Keller’s tally 2:19 into the third period gave the hosts a much-needed boost. After losing a face-off in Nashville territory, Keller zipped around his opposing center to gain the puck and flicked a sharp-angled shot that banked into the goal off Saros’ shoulder for his team-leading 12th goal.

However, Josi’s power-play goal at 7:25 restored Nashville’s three-goal edge. With a slew of skaters screening the goalie, Josi’s long wrist shot found the mark for his 12th goal of the season.

Crouse again pulled the Coyotes within a pair just past the midway point of the third period by pouncing on a loose puck for his ninth goal of the season, but they couldn’t pull closer.