Predators attempt to bounce back vs. Blue Jackets 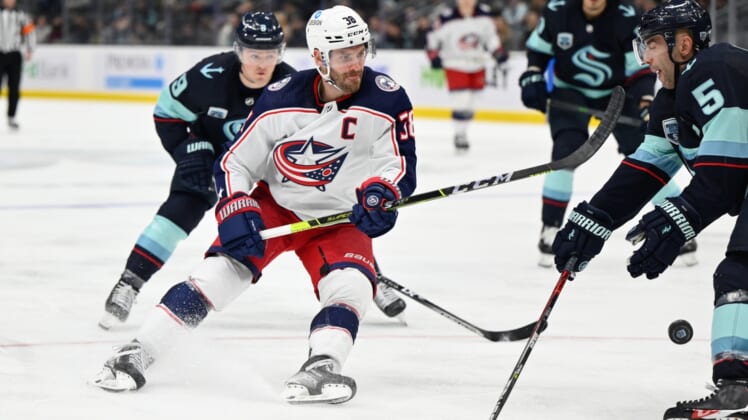 After having their seven-game win streak snapped with a 5-3 loss at the Washington Capitals on Wednesday night, the Nashville Predators won’t have to wait long to try to start a new streak.

The Predators, winners of eight of their last 10 games, now travel to Columbus, Ohio, to play the Blue Jackets on Thursday in the second game of a road back-to-back.

Nashville, playing for the first time since Dec. 17, fell behind 3-0 in the first period against the Capitals but rallied to tie it, 3-3, with three second-period goals in the span of a little over six minutes. But Evgeny Kuznetsov scored what proved to be the winner with a short-handed goal at the 14:24 mark of the third period, and Carl Hagelin sealed the win for the Caps with an empty net goal a few minutes later.

Nashville coach John Hynes refused to use a 12-day break that included four COVID-related game postponements as a reason for his team’s slow start.

“I wouldn’t necessarily say rust,” Hynes said. “I think it was just that we had some breakdowns and they’re a highly talented team. I think sometimes coming off a break, when you play a talented team like that, you have to be a little bit tighter and not give them those types of looks that we gave them.”

The seven-game win streak tied for the fourth longest in team history.

“I really liked our response,” Hynes said. “It wasn’t the first period that we wanted, but I think when you look at the resilience, the mental and physical toughness that we played with … we came back and tie the game but unfortunately we couldn’t get the game-winner. But I give the guys a lot of credit for the way we played. I liked a lot about tonight’s game.”

Columbus is 2-7-1 in its last 10 games and will be playing for the first time since a 5-2 loss at Edmonton on Dec. 16. The Blue Jackets got captain Boone Jenner, who leads the team with 11 goals, back from COVID protocol on Wednesday.

“I felt good,” Jenner told the Columbus Dispatch. “They’ve been practicing (this week) and I just wanted to jump in. I tried to stay active throughout the protocol. I tried to ramp it up a little bit (at home), so I think that helped. It’s always different when you’ve been off the ice and you try and jump back on, so I was just happy with how I felt and how I practiced today.”

Winger Patrik Laine, out since Nov. 3 with an oblique strain, returned to practice earlier in the week, but Columbus coach Brad Larsen refused to say if Laine would play on Thursday night. The Blue Jackets are 6-3-0 in the nine games that Laine, who had 44 goals in the 2017-18 season, has played.

“It’s just up to the coach, when he wants to put me back in,” Laine said. “I’ve been feeling really good the last week, week-and-a-half, but I feel ready to go.”

“The fact that he wants to play, I love that,” Larsen said. “But we want to make sure we’re making the right decision.”