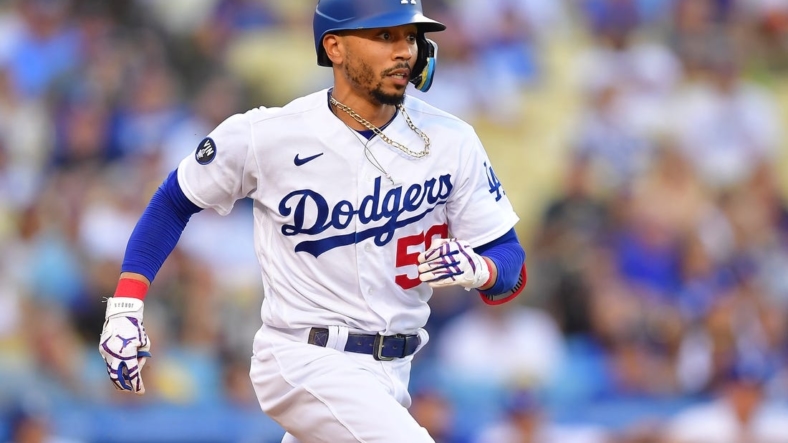 Mookie Betts has shown leading-man abilities for some time, but he has continued to expand a key dimension to his game by leading the way in home runs on a Los Angeles Dodgers roster full of sluggers.

So while Freddie Freeman, Justin Turner, Max Muncy and Cody Bellinger are the expected power sources, Betts leads the Dodgers with 33 home runs. He now will meet up against the club he has his most home runs against in 2022 when the San Francisco Giants arrive in Los Angeles on Monday.

Betts’ career-best 33rd home run of the season came in Saturday’s victory over the San Diego Padres, while his previous best of 32 came in his MVP season of 2018 with the Boston Red Sox.

A full month still remains in the regular season.

And more long balls could be on the way since Betts already has five home runs against the Giants this season. He had a pair of doubles in Sunday’s 9-4 victory over the Padres.

“I think if you would have asked who’s going to lead our team in homers this year, I don’t think Mookie would have been many people’s first choice,” Dodgers manager Dave Roberts said. “But he’s having a tremendous MVP-type season. And he can still get a hit, take a walk, control the strike zone. Those are all the ingredients you want from an elite player.”

The Dodgers will send left-hander Andrew Heaney (2-1, 2.12 ERA) to the mound for his 11th start of the season. His first year in Los Angeles has been interrupted by shoulder issues, but he has made each of his past seven starts in succession, recording 47 strikeouts in 31 1/3 innings over that stretch.

Heaney faced the Giants on Aug. 1 at San Francisco, giving up one run over four innings with seven strikeouts in the Dodgers’ 8-2 win.

The Giants will counter with right-hander Logan Webb (11-8, 2.89), who has been plagued by a lack of run support and defensive support of late. He was just 2-4 in six August starts but had a respectable 2.83 ERA.

And while opponents tagged Webb for seven runs combined over his past two starts, none of them were earned. A two-out Brandon Crawford error Aug. 24 at Detroit led to a six-run Tigers inning. He is 1-3 against the Dodgers in eight lifetime starts with a 4.20 ERA.

The Giants will enter the series after a three-game home sweep of the Philadelphia Phillies. San Francisco earned a 5-3 victory over the Phillies on Sunday after a game-ending two-run home run from Wilmer Flores. The Giants’ bullpen blew a 3-0 lead in the eighth inning.

After making life miserable on the wild-card contending Phillies, the Giants now will test themselves against the rival Dodgers.