With only six more weeks remaining in the regular season, a few different players have started to stand out among the rest in the race for the NFL MVP.

While you have some of the normal faces and former league MVP’s competing for the prestigious award, there are a few other names in the conversation this season. Heck, even a defensive player might acquire a couple of first-place votes.

Here is Sportsnaut’s look at the top-five MVP candidates.

As has been mentioned a lot recently, Rodgers is playing at the highest level of any quarterback in the history of the league. Fresh off another 50-point performance, the Packers are also right in the thick of the conversation as the top team in the NFL heading into Week 12.

Statistically, it’s absolutely stunning what Rodgers has done. In fact, he would place third in NFL history with a 120.1 rating if the season were to end today. Amazingly, his 2011 season ranks first in league history in that category. More importantly, the former MVP has led the Packers to a league-high 33.0 points per game. Based on these stats and the Packers success thus far this season, it’s hard to imagine that Rodgers wouldn’t be the top MVP candidate if he continues this extremely high level of play moving forward. 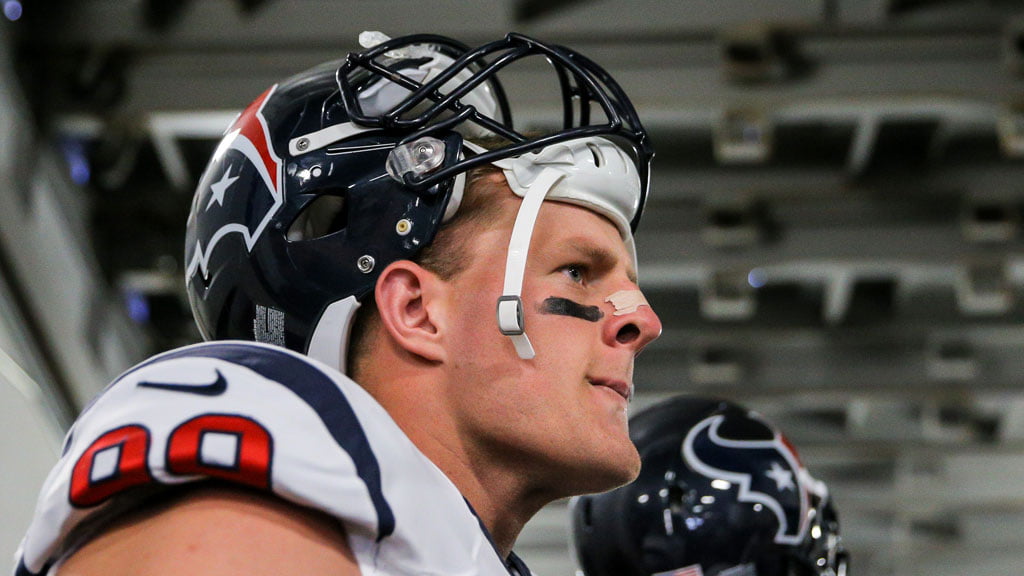 Courtesy of USA Today: As rare as it is, a defensive player might be in the MVP conversation this year.

What if the Texans were to pull off the improbable and earn the AFC South title this season? Would that make Watt an instant MVP candidate? What he has done for this team during the 2014 season is nothing short of amazing. Now relying on a quarterback who just made his first NFL start after Ryan Fitzpatrick bombed out, the Texans are at .500 and just one game behind the Indianapolis Colts in the division.

According to Pro Football Focus metrics, Watt grades out as the best overall player in the NFL. His +58.7 grade heading into Week 12 is so far ahead of the second-best player in the NFL (Von Miller, +38.5), that it has to be taken into account here.

Watt’s consistent domination and ability to disrupt throughout each and every game he has played this season is right up there with the best defenders to play in the modern history of the league. And despite playing in a league that caters to the offense, Watt is among the most valuable players in the NFL. That’s not even up for debate right now.

It would have been impossible to imagine Brady on the MVP watch list just a few short weeks ago. Heading into October, the Patriots were 2-2 and coming off a disastrous 27-point road loss to the Kansas City Chiefs. At that point, there was a ton of talk about Brady regressing and losing the elite ability he had shown for the better part of the past decade.

Like he has done throughout his career, Brady responded big gime. Prior to a two-interception performance against the Indianapolis Colts last week, Brady had thrown 18 touchdowns compared to one interception in his previous five games. Now at 8-2 on the season and winners of six consecutive, the Patriots are firmly in the talk as the top team in the NFL. Without a ton of weapons on offense and some lackluster receiving targets, Brady continues to prove his worth among the league’s most valuable. Depending on how the Patriots finish off the regular year, he could very well earn another MVP award. 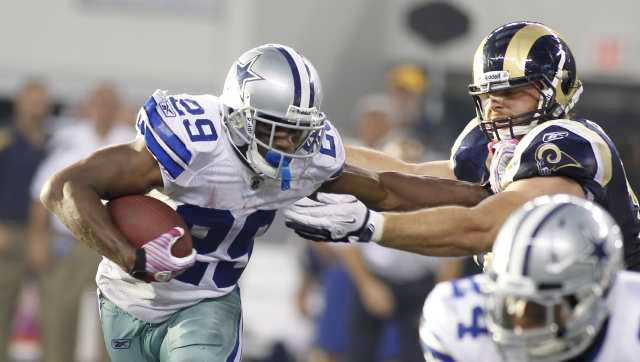 Courtesy of LA Times: Murray’s domination has been evident all season long.

The simple fact that Murray is averaging 151.4 total yards per game for a Cowboys offense that has historically been pass heavy is amazing. Now take into account that he leads the league in rush attempts, and you have someone that seems to be as valuable to his team as any player in the league.

Murray has put up 100-plus yards in nine of the team’s 10 games, including hitting that triple-digit plateau in the first eight games of the season. Not only does Murray lead the league in rush attempts, he tops all running backs in rushing yards, total yards and is among the top five in yards per rush. If Dallas wins the NFC East with Romo having a down statistical season, Murray surely belongs in the MVP conversation. This is only magnified by the fact that he represents 38 percent of the team’s yardage total through 10 games.

By pure volume, Luck has to be in this conversation. He leads the NFL in pass attempts, passing yards and yards per game. He’s on pace to throw for 5,341 yards and tally 48 total touchdowns. Oh, and Luck leads the league’s third-best scoring offense at 31 points per game.

The biggest knock on this third-year quarterback is mistakes. He’s thrown 10 interceptions in as many games this season, including multiple picks three different times. If Luck wants to be mentioned with the elite quarterbacks in the league, he simply needs to cut down on these mistakes. If that happens in the final six weeks of the season, there is little doubt that Luck will remain a top MVP candidate.