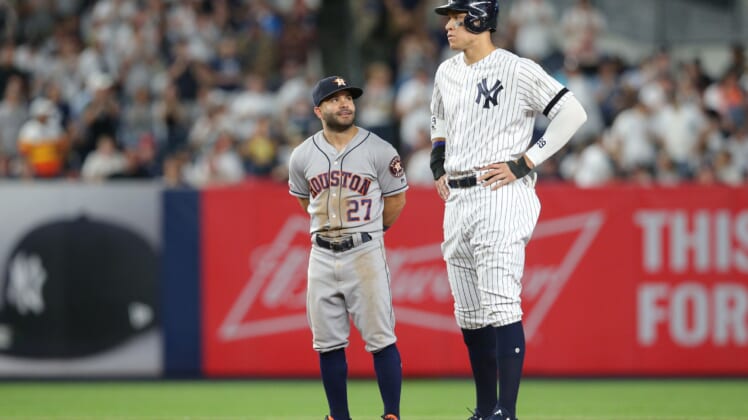 Baseball fans waited months for the offseason to pass by and the MLB season to arrive. Now we are less than two weeks away from the conclusion to the 2019 regular season and the start of playoff baseball.

Three clear favorites stand out with the best shot to compete for the World Series. The Houston Astros, Los Angeles Dodgers and New York Yankees will enter with the best talent, but each postseason shows us that the most talented team doesn’t always advance.

October offers the potential for plenty of surprises thanks to some under-the-radar teams that earned their tickets to playoff baseball and are ready to snap decades of poor fortune.

Now let’s take a look at how these contenders stack up with the postseason approaching.

Note: All stats and records are accurate through play on Thursday, Sept. 19.

The Cubs are still battling it out with the Milwaukee Brewers for the final wild-card spot. It’s a race that could go down to the last games of the season, but losing Christian Yelich might be too big for the Brewers to overcome.

If Chicago sneaks in, it could see Javier Baez and Anthony Rizzo in its lineup for October. A healthy version of this team would have an outside shot at taking down the Dodgers. Unfortunately, injuries throughout the 25-man roster and uncertain timetables for a return don’t line up well with a one-game wild card.

St. Louis entered the season with big expectations after acquiring Paul Goldschmidt and getting Marcell Ozuna back from shoulder troubles that bothered him in 2018. While this team finds itself in playoff contention, St. Louis can’t feel great about its chances even if it locks down the division.

Minnesota looked like a serious World Series competitor throughout the early season. Now a few months later, the fans may need to prepare for another October disappointment.

While the Twins’ lineup remains dominant with a historic five players with 30-plus home runs, the pitching is a significant question. Minnesota’s ace Jose Berrios owns a 4.54 ERA since the All-Star Break and No. 2 starter Michael Pineda will miss October following his PED suspension. A rotation with Berrios, Jake Odorizzi and Kyle Gibson isn’t remotely good enough to beat the Astros or Yankees in the postseason.

Washington has treated its fans to a roller coaster ride this season. A team that sat in the bottom of the standings soared back into the playoff hunt and seemed to have it locked up until a recent skid. Fortunately for the Nationals, injuries to the Cubs and Brewers should let them maintain their spot.

Hosting the wild-card game would be a notable advantage for Washington. The big swing in the team’s favor is putting Max Scherzer on the mound in a win-and-in scenario. It’s the exact setting for Scherzer to thrive and then pave the way for Stephen Strasburg and Patrick Corbin to lead off in a division series. Keep an eye out for the Nationals as the biggest potential surprise in October.

It seems like ages ago we saw the Rays atop the MLB standings with a chance to shock the world as the season rolled out. While some of the shine has worn away, this club is still dangerous.

Charlie Morton will be a Cy Young-caliber arm for the Rays to throw out in the AL’s wild-card game. Tampa Bay will also welcome back infielder Brandon Lowe, who posted a .862 OPS before suffering an injury in July, before the postseason. A team with the lowest payroll in MLB ($63.2M) could go the distance this October.

Oakland once again finds itself in position to be one of the best stories in baseball this year. The Athletics could match last season’s 97-win mark and are in an even better position to win in the postseason this year.

Even without ace Frankie Montas, who is suspended through the playoffs, Oakland’s pitching staff ranks seventh in ERA (4.03) during the second half. Meanwhile, its lineup ranks seventh in OPS (.797) and sixth in runs scored (343) over that same span. While this team might lack star talent, its mix of productive veterans and young guys on the rise could be just the right combo to finally get some wins in October.

Everything planned years ago is finally coming together for Atlanta. It will head into October with one of the best lineups in baseball and a pitching staff that should be good enough to fight.

It all starts with Ronald Acuña Jr, an MVP-caliber player that is ready to shine in the postseason. He’ll receive some help from Josh Donaldson and Freddie Freeman, two more All-Star hitters that can go deep at any time. If Mike Soroka (2.80 ERA), Mike Foltynewicz (2.76 ERA) and Julio Teheran (3.27 ERA) can maintain their recent level of play, Atlanta’s path to the NLCS is clear.

Typically, a team with the best record in the NL by a significant margin would feel extremely confident with October approaching. Los Angeles might be feeling a little nervous though because of its bullpen.

Closer Kenley Jansen’s second-half troubles are concerning. He owns a 4.84 ERA since the All-Star Break and blew five saves in 12 attempts. If Jansen corrects his issues, Los Angeles will ride one of the best rotations and a top-five lineup to a deep October run. If Jansen struggles and the ninth inning suddenly becomes a question mark, this team suffer an NLDS upset.

It’s frankly remarkable to see where New York stands given everything it dealt with this season. Lengthy stints on the injured list to stars all across the diamond and somehow the Yankees boast the second-best record in baseball.

New York’s lineup is loaded from top to bottom with a bench that is also capable of driving in a plethora of runs. It also helps the Yankees that they boast one of the best bullpens in baseball. Everything will come down to the rotation. Masahiro Tanaka and James Paxton must be at their peak or this team will finally be healthy only to disappoint before even reaching the World Series.

This team is more talented than the club that won the World Series in 2017. Of course, walking into October with the most talented roster doesn’t guarantee a team anything except high expectations.

Houston will send out Gerrit Cole, Justin Verlander, the co-favorites for the AL Cy Young award, and Zack Greinke as its top three starters. It’s the rotation that can sweep a division series, get time to rest and then be ready for the best the AL offers in the ALCS. Postseason experience, the best layoff rotation we’ve seen in years and the league’s most-productive lineup since the ASB. This is the team to beat.