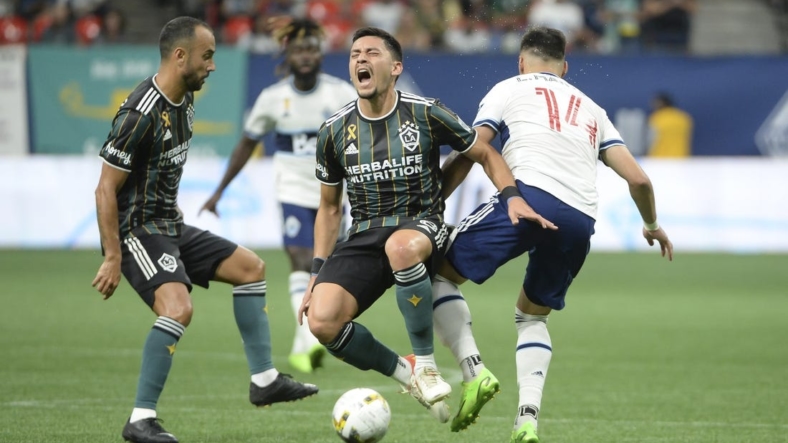 Goalkeeper Thomas Hasal made two save for the Whitecaps (10-14-7), who snapped a three-match losing streak and moved within six points of the seventh and final playoff spot in the Western Conference with three regular-season games remaining.

The Galaxy (11-12-7, 40 points) had a six-match unbeaten streak snapped and missed a chance to move into playoff position.

The Whitecaps broke a scoreless tie on Gauld’s goal in the 57th minute. Ryan Raposo’s corner kick from the left wing found Tristan Blackmon for an uncontested header from the top of the 6-yard box.

Galaxy goalkeeper Jonathan Bond made a sprawling save, with the rebound sitting in front of the net. Galaxy defender Julian Araujo tried to poke the ball away from the goalmouth, but Gauld, who was near the top left of the 6-yard box, was able to get a foot on the clearance and then blasted a low shot just inside the near post.

The Whitecaps doubled their advantage in the 68th minute. They worked the ball down the left wing and Brian White flicked on Luis Martins’ cross to Vite at the far post and he tapped the ball into the open side of the net.

Ricketts put the game away on a breakaway goal in the 86th minute off an assist from Julian Gressel.

The first half was scoreless despite the Galaxy dominating possession (71%) and having a 4-2 edge in shots, but neither team was able to land one on target.

Los Angeles had the two best chances of the half.

In the sixth minute, the Galaxy’s Riqui Puig had a pass into the penalty area blocked but the ball came right back to him and his 20-yard shot went just wide of the top right corner of the net.

In the 20th minute, Los Angeles’ Javier “Chicharito” Hernandez put a header from the top of the 6-yard box just wide of the left post after a cross from Victor Vazquez.