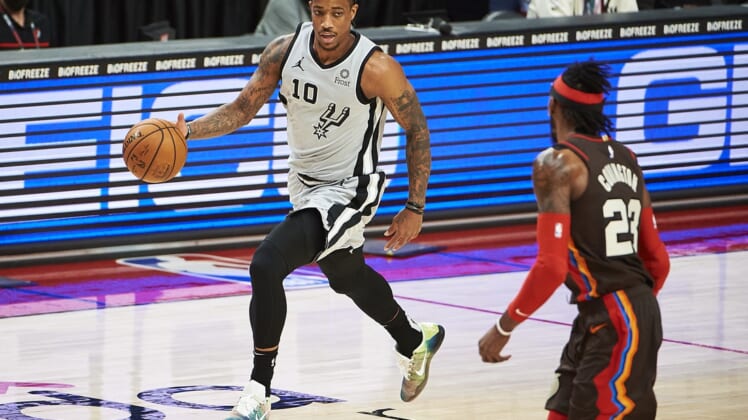 Damian Lillard scored 30 points in three quarters of action and CJ McCollum added 27 as the Portland Trail Blazers rolled to a 124-102 win over the visiting San Antonio Spurs on Saturday in a game with serious playoff implications for both teams.

The Trail Blazers were slow out of the gate in the second game of a home back-to-back but found their footing late in the first quarter. Portland led by 10 points at halftime, by 15 after three quarters, and by as many as 26 points in the final period even with Lillard on the bench.

The win was the third straight for the Trail Blazers (39-29) and their seventh in eight games. Portland is currently sixth in the Western Conference standings, a half-game behind idle Dallas for the fifth spot with four games remaining on its regular-season schedule.

Norman Powell tallied 18 points for the Trail Blazers, with Jusuf Nurkic hitting for 17 and nine rebounds. Robert Covington pulled down 11 rebounds in the win.

DeMar DeRozan paced the Spurs with 20 points while Lonnie Walker IV scored 18, Dejounte Murray racked up 15 points and Rudy Gay scored 11. San Antonio (32-35), playing the second game of a road back-to-back, dropped its sixth game in its past seven outings.

The Spurs, who have five games left to play, still have a near-lock on the 10th spot in the standings and the final position in the 7-10 play-in game for the final two places in the postseason.

Lillard paced all scorers with 21 points at intermission, with McCollum adding 11 as the Trail Blazers improved to 37.7 percent shooting after their ragged first period.

DeRozan led San Antonio with 16 points and Walker pumped in 10 over the first two periods.

The Trail Blazers pushed their advantage to as many as 16 points in the third quarter and were up 90-75 heading into the final period after Lillard poured in Portland’s final six points. Nurkic was a huge factor in the third quarter as well, scoring 13 points, many on pick-and-roll passes from Lillard.

Portland played without veteran reserve Carmelo Anthony, who was held out with sprained right ankle.