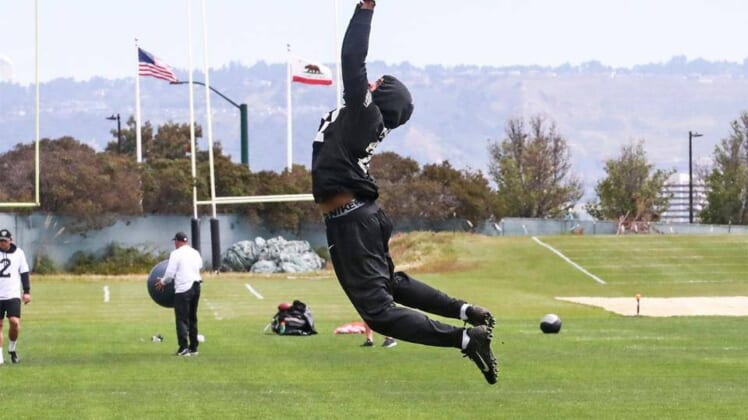 We’re back on our Live Tuesday podcast discussing the latest Raiders roster signings. We delve deep on the Raiders CB situation, AFC West: LA Chargers review, and is Donald Penn on his way out?

Scott Gulbransen, Scott Winter and special guest co-host Tony Cordasco start talking about the Raiders continued (and continuous) roster moves. Just a few days after bringing in some free agents in, and talking glowing about them, the team cut several lose while singing some new undrafted free agents, the team also signed some veteran free agents too.

Cordasco believes Switzer is a big deal for Gruden’s Raiders.

The team talks about how Jon Gruden is a charismatic coach in a mold you just don’t find much in the NFL anymore. Gruden isn’t wasting any time in making roster changes if a player doesn’t fit his style of play and attitude. Also, they pinpoint the fact the NFL is worried that Gruden will be wildly successful. As Cordasco said: “Gruden has a target on his back.”

Gulbransen also leads a discussion on how Gruden is truly channeling Al Davis and is more like the enigmatic late owner than many believed.

We also talk about the Raiders offense that was recently ranked just 20th in the NFL. Cordasco, Winter and Gulbransen all believes Oakland is in the Top 10 – perhaps Top 5.

Finally the team discusses the overhaul of the Raiders cornerbacks and what it might mean for the team in 2018.

The Silver and Black Today Podcast is available on all major platforms including iTunes, Google Play, Soundcloud and Stitcher. We appreciate your support of our site and ask that you subscribe on your favorite format. That way you’re assured of getting the latest podcasts delivered right to your device.

Also: please take the time to leave us a favorable review. That helps us make sure more and more of Raider Nation finds the podcast and listens.

As always, thanks for your continued support.

REMIDNER: Join us every Sunday morning from 8am to 10am on CBS Sports Radio 1140-AM in Las Vegas for the Silver and Black Today show. We bring on national experts, Raiders experts, players, coaches and more. Not only that, we make you part of the show with live calls. Catch the show live in Las Vegas or stream it worldwide on the Radio.com app.