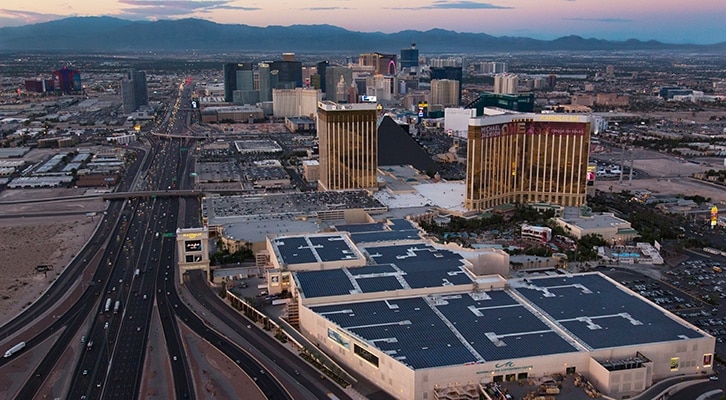 Publisher Scott Gulbransen says despite some who want to make parking an issue, there is already more than enough parking within walking distance of the new stadium.

Parking is something that’s easy to find in Las Vegas almost everywhere you travel. Outside the controversy of Strip hotels and casinos now charging for self-parking, it’s really never been a topic that visitors or locals give much attention.

Now, even though there is roughly 100,000 parking spots within two miles of the new $1.9 BIllion stadium being built for the Raiders, some want to continue to make it an issue.

The Raiders will have 2,500 spaces on site and transportation hubs to make getting to the game easy.

At this past Thursday’s Las Vegas Stadium Authority Board meeting, member Tito Tiberti again raised the issue at the very end of the long meeting. Tiberti simply shared that it was the one question he tends to get asked by those who inquire about his work on the Board. That was pretty straight forward while pressing Chairman Steve Hill on a resolution of the issue for the next meeting on March 1st.

Yes, the formal plan for parking for stadium events – and particularly Raiders games – must be hammered out by March 1st so it can be presented to the NFL Owners at their next meeting in Orlando in March. The plan itself, for stadium purposes, doesn’t need to be done until September. A majority of the Board, the team, and County transportation officials, all agree it will get solved and there is no panic, or no overwhelming level of concern. Despite this, us media types still overwhelmingly harp on this issue.

The Raiders will need 16,250 parking spaces (according to early estimates for County requirements for 65,000 spectators) according to Clark County regulations – regulations that can be waived or changed for the project.

“We’ve got time,” Hill said to a gaggle of reporters after the meeting.“We’ve made the progress that we needed to make by today to narrow down what needs to be resolved over the next few weeks. We’re confident that we’ll be able to do that.”

US Bank Stadium in Minneapolis has no onsite parking and only one garage adjacent to the stadium.

Just look to Minneapolis who just hosted the Super Bowl and just this season opened their new stadium – US Bank Stadium. The stadium itself has almost no parking spots sans a few thousand that are a block off the stadium site in a new garage. But due to its downtown Minneapolis location, there are another 30,000 parking spots at neighboring lots and structures within a 20-30 minute walk, according to the stadium website.

Another example is Chicago’s Soldier Field. Even after its major facelift, parking for Bears games are split between a 1500 car lot adjacent to the stadium, and several offsite lots that are part of the Chicago Parks system including museums and other public spots.

In Las Vegas, directly across from the stadium site, you have of thousands of parking spots at Mandalay Bay, the Luxor and Excalibur hotels. In addition, we were given a tour of several MGM-owned lots across Las Vegas Blvd. from Mandalay Bay last week that could mean another 30,000 parking spaces. That doesn’t include other pieces of property owned by private entitieswho have already expressed an interest to use their lots for parking during stadium events.

Raiders President Marc Badain said at Thursday’s meeting there wasn’t a concern about getting the parking plan done and the team continues to talk to now-jailed Bali Hai Golf Club owner Billy Walters’ representatives about purchasing that property for additional stadium-close parking.

The Raiders are still negotiating for a possible purchase of the Bali Hai Golf Club so they could turn it into stadium-close parking.

It’s as simple as this: those who expect to drive into a stadium parking lot (like Oakland, San Diego, or Phoenix) and park next to the stadium will not get that in Las Vegas. It’s just not going to happen and that’s not a bad thing at all.

With an estimated 20,000 fans from each Raiders game expected to be tourists staying within walking distance of the game, the atmosphere and ability to venture to the location by visiting restaurants, bars, resorts, and casino events on their walk to the stadium will be an experience unique to the Raiders and Las Vegas. Not unlike other urban stadium locations who often develop stadium or ballpark districts (like San Diego’s East Village adjacent to Petco Park, home of the Padres), the famed Las Vegas Strip, and the yet undetermined new areas around the stadium yet to be developed, will serve as a pedestrian hub by which spectators can walk and enjoy the pre and post game festivities without the hassle of parking next to the stadium.

The other net positive of this new parking model will be what it means to increased community-based jobs with the likes of the Regional Transportation Commission (drivers, transit workers, etc.), taxis, and small transportation business owners like Uber and Lyft drivers as well. The RTC is already working on a shuttle system (like they have in San Diego, Chicago, and other cities) to bus local fans from all areas of the valley, and tourists from other locations as well. Again, the economic impact of this model isn’t a negative – it creates jobs and traffic (by foot, shuttle, or transportation) to local businesses keen on making money on game or event days.

Will parking for Raiders games in Las Vegas be anything like they are in Oakland. Absolutely not.

That alone, and the seemingly odd and baseless concern over “where” the parking will be, does not mean there’s a problem. Much like the entire project, parking and tailgating at the Raiders new stadium will be an experience like no other. An experience only Las Vegas can pull off.

So let’s not cry wolf everytime the parking plan is raised. Just know that in Las Vegas, we just get it done.