Playoff Teams That Improved the Most During the 2015 NFL Draft

Courtesy of the Associated Press: Byron Jones is going to be an absolute stud for the Cowboys.

The NFL draft isn’t only used for bottom feeders to find their way up the ranks in their division. Playoff teams from the season before attempt to hit on the few perceived weaknesses that they have. If this happens, said team finds itself in a better position to contend for the championship the following season.

Three NFL Playoff teams from a season ago did just this during the 2015 NFL draft.

We have to include the signing of La’el Collins here. With him on board, the Cowboys pretty much added three top-20 talents with only one first-round pick in the draft. Collins, who many considered one of the best offensive linemen in the draft, will now likely replace Ronald Leary as the Cowboys starting left guard. In addition to Travis Frederick, Zack Martin and Tyron Smith, that gives Dallas four first-round talents on an offensive line that was already among the best in the business last season. It also pushes Leary to a reserve role, creating more depth on the line.

This is huge for a multitude of reasons, none more than the necessity for Dallas to provide a strong running game for Tony Romo without the services of 2014 NFL rushing leader DeMarco Murray.

With the talent that Dallas now possesses up front, it’s going to be interesting to see if anyone from a running back trio of Darren McFadden, Joseph Randle and Ryan Williams emerge from the pack. The opportunity is now there right in front of them.

Byron Jones is as good or better than any corner taken. If he gets healthy he may be the best. Lowest passer rating against, but lesser comp

Moving on to the draft itself, Dallas nabbed two top-20 talents in the first two rounds. First off the board was former Connecticut standout and combine warrior Byron Jones out of Connecticut. The athletic corner fills a tremendous void in the team’s secondary, but could also freelance at safety if the Cowboys are not happy with their current starters. It’s this type of flexibility that teams strive for in the first round of the draft. Dallas got it without batting an eye.

The most interesting pick of the entire NFL draft was Dallas’ selection of former Nebraska edge rusher Randy Gregory at the bottom of the second round. Long considered one of the premier pass rushers in the entire class, Gregory saw his stock dip considerably after failing a drug test at the combine. Other perceived character concerns also played a role here. But make no mistake about it, Gregory boasts the necessary talent to be a dominating presence in the NFL.

The rest of the Cowboys picks were more about depth and finding long-term solutions at certain positions. In a vacuum, none of those selections really stand up against what Jerry Jones and co. did in terms of acquiring three top-20 players, all at positions of utmost need. As was the case the previous two years, it appears that Dallas has aced the 2015 draft.

Detroit had a few positions it needed to address in order to close the gap between itself and the Green Bay Packers in the NFC North. Like a maestro conducting an orchestra, general manager Martin Mayhew did just that.

It started with a trade down from the 23rd to the 28th spot in the first round. In that deal, Detroit was able to nab a veteran guard in Manny Ramirez while still picking up its target player, guard Laken Tomlinson from Duke. This was quite honestly the best of both worlds. Ramirez could start with stud right guard Larry Warfard while Tomlinson learns the tricks of the trade. Then again, Detroit might use Ramirez as its primary interior line backup while starting what seems to be a seasoned Tomlinson.

This is a really interesting pick for the Lions. Tomlinson is one of my favorite guards in this draft,” NFL Media’s Mike Mayock said about the selection. “Tomlinson is a people mover; a phone booth guy and a finisher.

Just imagine Warford and Tomlinson pounding rushing lanes for second-round pick Ameer Abdullah, who many had among the top running back prospects in the draft.

In identifying these two needs, the Lions pretty much told the world that they are no longer going to be a pass-happy squad. They now have the pieces in place to create balance on offense. That’s going to be absolutely huge for quarterback Matthew Stafford.

Defensively, Detroit also did a stellar job. One of the best picks in the entire draft was former Stanford standout Alex Carter in the third round. Once considered a Day 1 pick, Carter fell off a bit during his last season with the Cardinal. However, he figures to be the long-term solution opposite Darius Slay in Detroit. That was a much-needed pick right there. 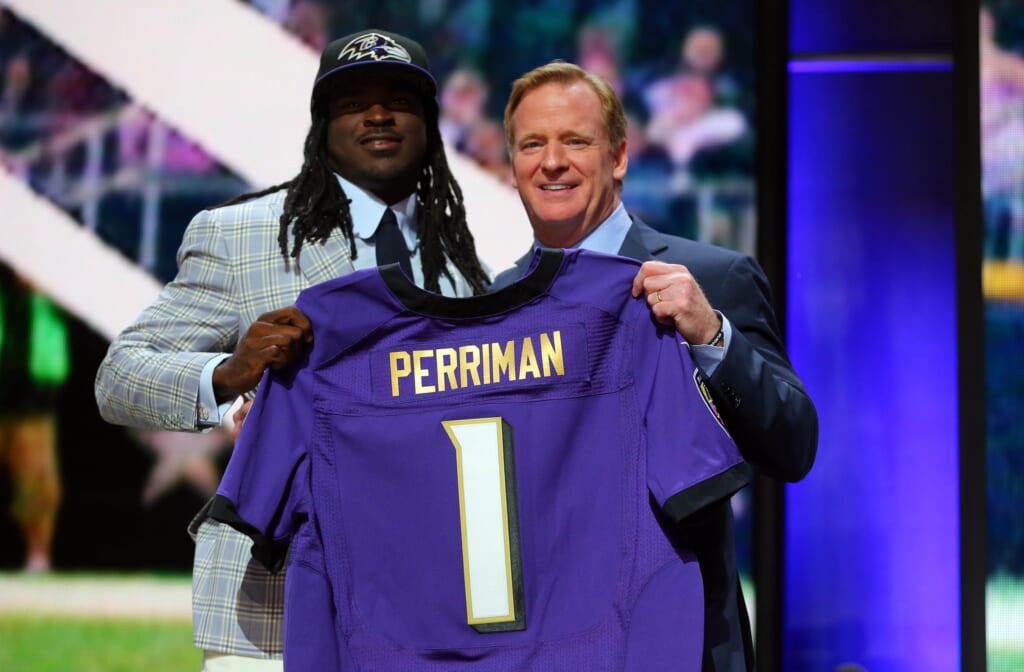 Here’s another team that recognized holes from what was a playoff performance last season, and addressed them in what seemed to be a round-by-round check-off list. First-round pick Breshad Perriman may seem a bit raw on tape, but his combination of physicality and speed is going to come up huge for Joe Flacco and the Ravens passing game, especially after the team lost Torrey Smith in free agency. Perriman, a 6’2″ and 212-pound receiver, is going to present some pretty extensive matchup issues for opposing defenses. Do they put smaller, speedier corners on the Central Florida product? If not, will defenses be forced to potentially get beat over the top when they line up the more physical cover guy against him? That’s a lot to take in right there.

At this point, we have no idea if Dennis Pitta is going to ever return to the field after suffering multiple serious hip injuries. In deciding to invest in another tight end, Baltimore made it clear just how much it values this position. Maxx Williams was the consensus top tight end in the class. And to get him with the 55th pick was an absolute steal. In adding both Perriman and Williams, the Ravens gave Flacco two shiny new toys to play with.

The additions of defensive tackle Carl Davis in the third round and outside linebacker  Za’Darius Smith in Round 4 were also huge for this team. Both players are going to be long-term solutions at key positions in the team’s 3-4 defensive scheme.