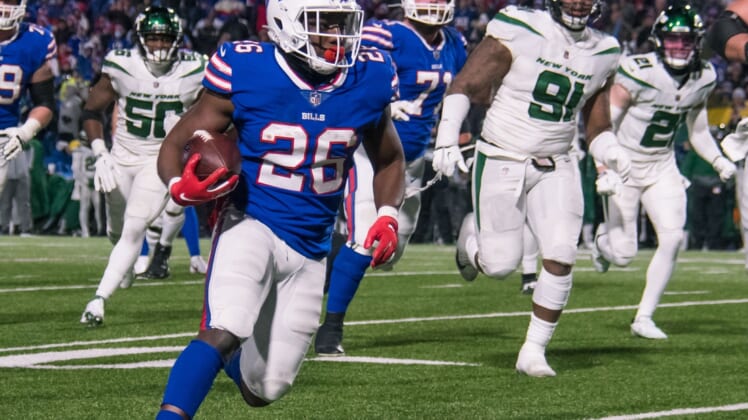 The finale of the four-game divisional playoff round might be the most anticipated, a rematch of the Buffalo Bills and Kansas City Chiefs featuring two of the best quarterbacks in the NFL.

In a rematch of last year’s AFC Championship game, the Bills are back at Arrowhead Stadium, where Buffalo scored a win over the Chiefs earlier this season.

To help with our viewing pleasure, we have a Same Game Parlay for your consideration. This parlay was constructed on DraftKings.

Bills vs Chiefs SGP: +260 on DK
Before we explain the three-leg parlay for Bills-Chiefs, here is an overview of the entire SGP.

–Devin Singletary TD
Singletary scored a touchdown in five straight games, with eight total in that span. That’s elite production and consistency for the top back in Buffalo.

Singletary has 22 total red zone looks in just the past three weeks. He’s heavily involved when this offense gets near the goal line.

Kansas City’s run defense has been reasonably sturdy of late. It remains the weakness of the Chiefs.

Buffalo has been efficient running the football, and should be able to get Singletary in the end zone if they sustain drives.

–Josh Allen over 34.5 rushing yards
I would feel comfortable bumping this as high as 54.5 if you wanted a SGP with higher odds.

Allen has been decimating teams with his legs lately, finishing with 60+ rushing yards in four straight games and five of 6.

At just 34.5 yards, this should be easy for the Bills QB. For context, he had 41 on the first drive of the Patriots game last week.

Allen has gone over this alternate total in seven of the last eight games and each of the last three times he’s played Kansas City.

What we have going for us with this leg is flexibility on how it hits. The Bills have shown they aren’t shy about designed runs for their quarterback, but Allen is also prone to tuck it and run when pressure pushes him out of the pocket.

The Chiefs have a significant advantage with their star DT Chris Jones rushing up the middle against an average Buffalo interior offensive line.

All that should do is flush Allen out of the pocket and get him running.

–Patrick Mahomes under 329.5 passing yards
It seems crazy to bet a Mahomes under, but there are so many numbers that suggest it’s the right play.

We’ve selected the highest passing yardage total available on DraftKings to give us some breathing room (Mahomes’ over is currently set at 284.5).

Mahomes has gone over 329.5 just six times this season, and only twice in the past eight games.

On the year, there isn’t a secondary playing better football than Buffalo. Only two quarterbacks have gone over their passing yards against this defense. Mahomes didn’t, finishing with 272 when they met earlier this season.

On average, the Bills surrender a measly 163 passing yards per game. It’s an elite secondary, and while Mahomes should be able to overcome that to a degree, I don’t think he gets 330 or over.