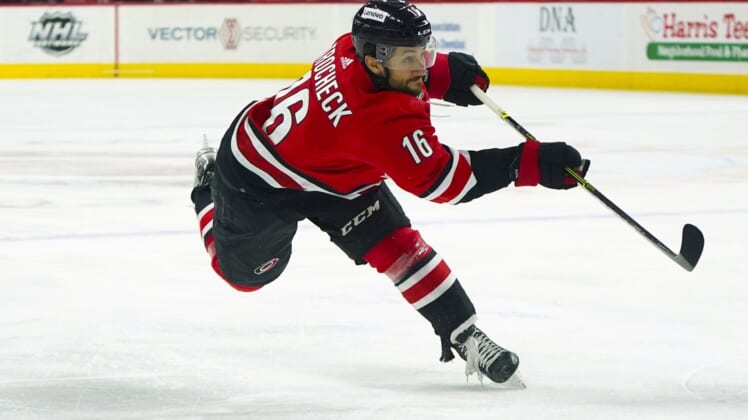 The New York Islanders and Carolina Hurricanes have continued down opposite paths since meeting in the season opener.

The teams are far apart in the Metropolitan Division standings heading into their Friday night matchup in Raleigh, N.C.

The Hurricanes sit atop the division standings as they gear up for another postseason run, while the Islanders are peeking ahead to next season.

New York and Carolina met on Oct. 14 in Raleigh, and the Hurricanes won 6-3 behind two goals and an assist from Andrei Svechnikov. The clubs haven’t faced off since.

Carolina (46-17-8, 100 points) remained hot after the season-opening victory, winning its first nine games. The Hurricanes haven’t slowed much, owning the top spot in the division standings for most of the season and officially clinching a playoff berth with a 5-3 home win against the Buffalo Sabres on Thursday night.

Hurricanes captain Jordan Staal added, “It’s great. It’s good news for this club. We worked hard to get here, but this was the first step. It’s definitely a night to celebrate.”

The Hurricanes gave up goals on the Sabres’ first two shots but still rallied for the win that kept them two points ahead of the second-place New York Rangers in the Metropolitan.

The Hurricanes had not been playing great the past couple of weeks. They lost 4-2 to the Sabres on Tuesday to fall to 4-5-3 in a 12-game span.

The Islanders, meanwhile, have been on the outside looking in for most of the season.

After the Islanders lost at Carolina in the season opener, they went on to drop three of their first four games. New York then lost touch with Carolina in the division race when it lost 11 in a row (0-8-3) from Nov. 7 to Dec. 5.

The Islanders (32-28-9, 73 points) have posted an impressive 27-18-4 record since the losing streak, but they still sit 13 points behind the Washington Capitals in the chase for the final Eastern Conference wild-card spot, with 13 games left.

New York is coming off a 3-2 road loss to the Dallas Stars on Tuesday, a result that ended a season-best four-game winning streak.

One of the highlights for the Islanders this season has been the play of third-year defenseman Noah Dobson, the 12th overall pick in the 2018 draft.

Dobson had two assists against the Stars to give him 40 points on the season (10 goals, 30 assists). He become the first Islanders defenseman since Nick Leddy in the 2017-18 season to hit that mark.

He is averaging 21:09 of ice time and has landed a spot on the first power-play unit.

“He just keeps continuing to grow,” New York coach Barry Trotz said. “The growth plate for him has been pretty steady.”

The Islanders will soon get back No. 1 goalie Ilya Sorokin after he missed the past four games with an upper-body injury. Sorokin could return against Carolina or the following night against the St. Louis Blues in the finale of the five-game road trip.

Sorokin has the second-best save percentage in the NHL (.927) and the fifth-best goals-against average (2.30).

Frederik Andersen likely will start in goal for Carolina after Antti Raanta stopped 18 of 21 shots against the Sabres on Thursday.