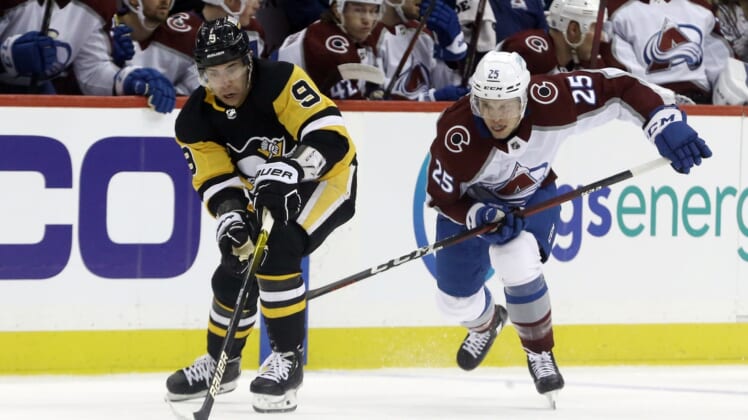 J.T. Compher added a goal and an assist, and Josh Manson, Darren Helm and Artturi Lehkonen also scored for the Avalanche, who won their fourth in row.

Jake Guentzel had a goal and an assist, and Bryan Rust, Evan Rodrigues and Mike Matheson scored for the Penguins (41-20-10, 92 points), who have lost three of four.

Colorado opened the scoring at 2:45 of the first. MacKinnon attempted a pass across the top of the crease for Mikko Rantanen, but the puck caromed off Rust’s stick in front and past Jarry.

Rust tied it for the Penguins 1-1 at 5:30 of the first. Marcus Pettersson let go a blast from the left point. Kuemper gave up a rebound right to Rust in the right circle, and he cashed in short side.

At 9:53 of the second, Compher restored the Avalanche’s lead. On a rebound, he lifted the puck under the crossbar from the low slot.

MacKinnon pushed Colorado’s lead to 3-1 with eight minutes left in the second. Burakovsky, from the left corner, fed MacKinnon above the near circle. He stickhandled a couple times, then scored short side.

Pittsburgh closed it to 3-2 with 2:17 left in the second. Rodrigues pilfered the puck at the far blue line for a breakaway. Kuemper stopped Rodrigues’ shot, but the puck rattle around under the goalie’s right pad. Toews inadvertently tapped it into his own net.

At 1:01 of the third, Manson’s shot from the right point sailed past Jarry’s stick to give the Avalanche a 4-2 lead.

Lehkonen scored an empty-netter with 52.2 seconds left, and Matheson scored with 30.8 seconds left.