5 players with the most at stake in NFL training camp 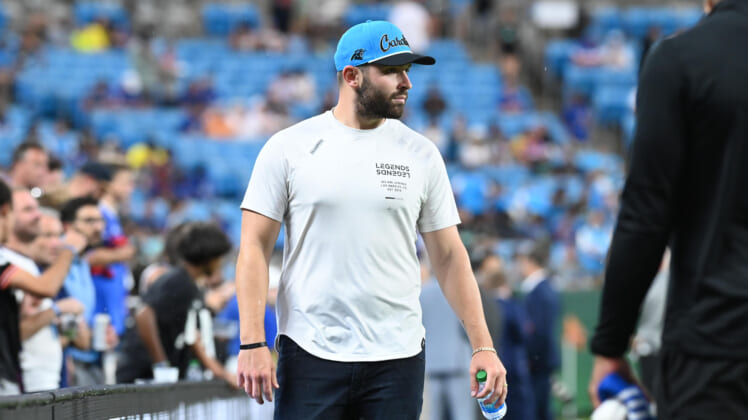 NFL training camp is here and with the countdown officially on for the 2022 season there are plenty of things for football fans to monitor this summer. Position battles and rookies draw the most attention, but there are quite a few players with a lot at stake in 2022.

This time of the NFL calendar is about more than just battles for starting spots and establishing early momentum before the regular season. For many players across the league, NFL training camp could be the most important opportunity in their careers to establish momentum before Week 1.

Whether it’s a former high draft pick who hasn’t truly established himself yet or a well-known former star who needs to preserve his roster spot and role, there is plenty of storylines to keep an eye on.

Let’s examine five players with the most at stake in NFL training camp 2022.

The Denver Broncos selected Jerry Jeudy with the 15th overall pick in the 2020 NFL Draft and expectations were high from the start. Even with the team’s quarterback issues, many saw Jeudy as a pro-ready receiver who could make an immediate impact thanks to his route-running. After a 865-yard rookie season, though, he took a significant step backward in 2021.

Related: 5 players who could be surprise cuts during NFL training camp

Acquiring quarterback Russell Wilson sparked a lot of excitement for Jeudy’s outlook in 2022. With the arrival of NFL training camp, many anticipate this being a launching point for the 6-foot-1 wideout to return to his status as one of the NFL’s rising, young receivers.

We’re not as confident. Jeudy, who plays a majority of his snaps in the slot, draws a lot of his targets near the middle of the field and that’s an area Wilson typically ignores in favor of targets to his receivers outside the hashes. It’s possible things change in this new system and Jeudy becomes a go-to option for Wilson. But if Tim Patrick and Courtland Sutton are generating far more buzz out of training camp, it might be fare to wonder about Jeudy’s long-term future in Denver.

Baker Mayfield should be the Carolina Panthers starting quarterback in Week 1. He was the superior draft prospect to Sam Darnold in the 2018 NFL Draft and he’s played much better than his peer over the last two seasons.

Yet, there are no guarantees. While Mayfield’s injuries proved to be his biggest problem last season, this was also a quarterback who made bad decisions and really needed the scheme heavily adjusted for him. It doesn’t help that what Mayfield is best at doesn’t fit well into Ben McAdoo’s offense.

That’s precisely why this situation is worth monitoring. If Mayfield can’t even beat out Darnold for a starting job, it will send a message across the league. NFL teams already had concerns and losing this quarterback competition would be an unforgettable stain on an already damaged resume before Mayfield hits free agency next year.

The Green Bay Packers need all the help they can get at wide receiver. Seeing an opportunity to buy low, hoping to strike gold as they did with linebacker D’eVondre Campbell, Green Bay signed Sammy Watkins. Once an outstanding draft prospect and a 1,000-yard receiver, Watkins’ play has plummeted in recent seasons and he’s now fighting for his future.

Across his last 47 games since 2018, Watkins has totaled just 2,007 receiving yards with nine touchdowns. Averaging 43.7 yards per game during that stretch, he simply hasn’t made the impact many expected after totaling 2,029 receiving yards in his first 29 career games.

The Los Angeles Rams, Kansas City Chiefs and Baltimore Ravens all tried to make things work and never came away especially impressed. Now, Watkins gets to be in a Matt LaFleur offense with passes coming from back-to-back NFL MVP Aaron Rodgers. If Watkins fails to make a strong impression in Green Bay, getting passed up by rookies in NFL training camp, it’ll be fair to wonder if his career is over.

The regime responsible for drafting Clelin Ferrell is gone. Selected with the 4th pick in 2019, the 6-foot-4 defensive lineman has been a massive disappointment since he entered the league. He started 26 games in his first two seasons then barely saw the field in 2021.

Realistically, this might be it for Ferrell. A new coaching staff will provide him a chance to prove he deserves a spot on the 53-man roster. There are snaps for the taking on the Raiders’ defensive line, but Ferrell must show far more than he ever did in his first three seasons. If things go poorly, there’s a chance this could be one of the final NFL training camps in his career.

There’s always a risk in spending first-round picks on players who are more athlete than a developed football player. That’s the gamble the Jacksonville Jaguars took and years later they are staring down a difficult decision.

K’Lavon Chaisson is on the roster bubble, responsible for only 13 quarterback hits in 31 career games. He basically fell out of the pass-rushing rotation in 2021, even for one of the worst NFL defense. To make matters worse, he’s already going to find himself behind edge rusher Travon Walker. A poor training camp likely won’t end Chaisson’s NFL career, but it will guarantee it’s his last week in Jacksonville.