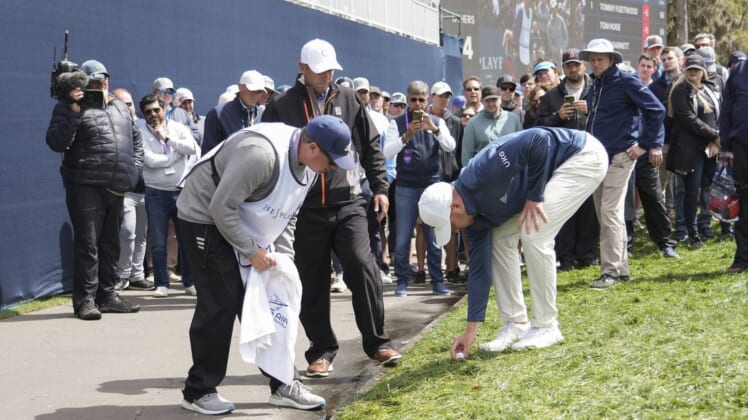 The Players Championship continued to have weather-related difficulties Saturday, as second-round play at the TPC Sawgrass in Ponte Vedra Beach, Fla., was suspended due to darkness at 6:29 p.m. ET. Play is scheduled to resume Sunday at 8:15 a.m. ET.

Just 48 of 143 golfers managed to turn in their second-round cards on what was originally supposed to be Day 3 of the tournament. Instead, after a suspension of play on Day 1 on Thursday and no competition held Friday because of rain and poor course conditions, Saturday was all about getting as much golf in as possible despite swirling winds that sent scores soaring.

Tommy Fleetwood and Tom Hoge shared the first-round lead at 6-under 66, but Fleetwood was even-par through the three holes he played Saturday and Hoge never got started. Among players who’ve completed two rounds, Justin Thomas and Bubba Watson are at 3-under, with four players — Russell Henley, Kevin Kisner, Daniel Berger and Dustin Johnson — at 2-under.

“It was very weird, obviously hard to get into a rhythm,” Thomas said. “Had a lot of different emotions; first off thinking it looks like we were on the right side of the draw and being pretty excited about that, and then realizing that was very much not the fact and then just having to get over that as quick as I could because it’s obviously frustrating, especially when I feel like I’m playing well, kind of getting just thrown into something like that.

“I’m thrilled with how I played and how I competed today. It was a very, very tough day, and I just stayed very patient and executed well.”

Scores were notably higher on Saturday, with high winds and difficult course conditions making things challenging. Among those who’ve finished two rounds, only Watson (4-under 68) and Thomas (3-under 69) were able to break par Saturday.

“It was one of those days you had to trust and you had to be committed to your shots, even if they go wild,” Watson said. “The key for me, though, is making putts. When I can start making some putts, which I did today, that’s really the key to any round for me.

“I hit some wayward shots, maybe not because of me but because of the conditions. But I made the putts, and that’s really what kept the whole round going all the time.”

Though more high winds are expected on Sunday, tournament organizers hope to wrap Round 2 and complete the final two rounds on Monday.