A small plane that was reportedly scheduled to fly a banner saying “we got DeMarco” over the training camp of the Dallas Cowboys has crashed, killing the pilot.

Earlier on Sunday a plane funded by Dallas Cowboys defensive end Greg Hardy flew over the Philadelphia Eagles practice with a banner that read:

Returning the favor of the prank, Eagles fans reportedly hired their own plane to fly over the Cowboys practice site in Oxnard, California. Sadly there is a report that a small plane crashed and burned, killing one person on the plane at the Compton-Woodley Airport in California (via abc7.com):

“One person was killed Sunday when a single-engine plane crashed and burned during takeoff at Compton-Woodley Airport. The plane, towing a banner, crashed at about 12:30 p.m. on a runway at the county-owned airport in the 900 block of West Alondra Boulevard, about two miles southwest of Compton’s central business district. Images from the scene showed the plane on fire, sending thick smoke over the airport.”

There is speculation that the plane was scheduled to fly over the Cowboys camp but it never reached its planned destination.

The fan that reportedly hired the plane tweeted this out on Sunday, as reported by nj.com: 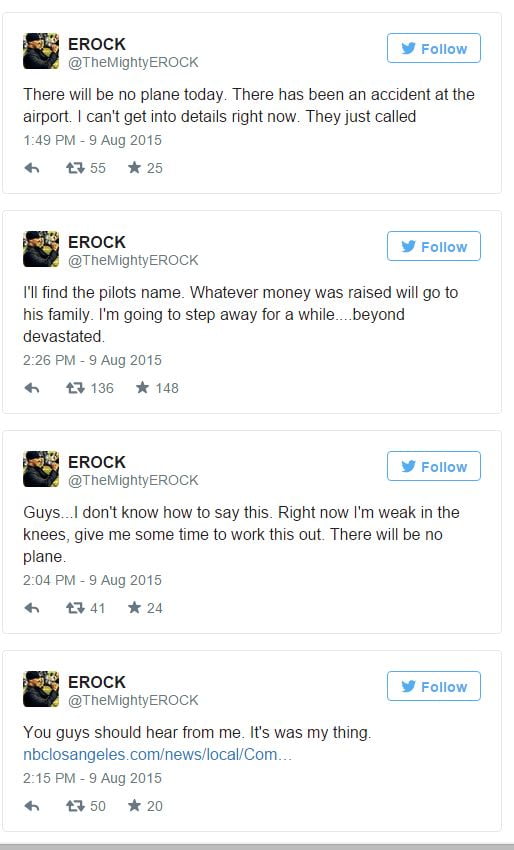 This is an unfortunate incident to report where a friendly game of tit for tat has gone ended in tragedy. Our condolences go out to the pilot’s family.