Although we’re just a year and a day removed from the Pittsburgh Steelers being 11-0, it’s time for coach Mike Tomlin to sit Ben Roethlisberger on the bench. Well, it may be too late this year, but Tomlin should have made that call weeks ago before the Steelers lost two consecutive games to push them outside of the playoff picture.

Earlier in the season, when Big Ben was struggling, dealing with injuries, Jeremy Fowler reported it was more likely for the two-time Super Bowl-winning quarterback to be placed on injured reserve than face a benching. It doesn’t matter how they categorize it, it’s time for Ben Roethlisberger to be benched.

The biggest benefit to a potential Roethlisberger benching is for general manager Kevin Colbert to get a head start on this offseason’s work. Pittsburgh won’t go into 2022 with Roethlisberger under center. However, they do have two backup quarterbacks on their roster who still have some starting potential.

I’ll be honest, I’m not too confident in Mason Rudolph’s ability to be an NFL starting quarterback, but this is a player the Steelers selected in the third round of the 2018 Draft, it’s time to see what he can do.

Much of the same issues that plague a 39-year old Roethlisberger also hold Rudolph back, yet Rudolph is still 26, he doesn’t have the excuse of a tired arm. Sure, ten starts is a small sample size to be able to determine what any player can do, especially a quarterback. A case could be made for a few more starts out of Rudolph, just to see if he can provide a jolt. Right now, it appears the Steelers wouldn’t have much to lose.

Personally, I’m more intrigued by Dwayne Haskins. Here’s a player who was selected 15th overall out of Ohio State just two years ago. Sure, his tenure in Washington didn’t go well, but it’s possible the 24-year old has grown a lot over the past year learning from Tomlin and Big Ben. 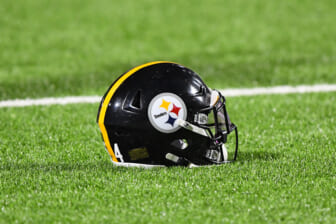 If a team felt Haskins was worth a first-round selection at age 22, who’s to say he can’t still develop in an ideal situation? Unfortunately, the 2021 Steelers aren’t exactly ideal.

They still have one of the worst offensive lines in the NFL. Najee Harris hasn’t been able to create holes behind a crumbling foundation. JuJu Smith-Schuster is out for the season, and Chase Claypool hasn’t been 100% either. Rookie tight end Pat Freiermuth and Diontae Johnson are their best playmakers, but neither can take over a game.

Whoever may step into a possible starting role, it’s not a spot that’s set up for success in Pittsburgh.

Understandably, benching Big Ben may be an extremely tough decision for Tomlin.

Roethlisberger’s the only starting quarterback Tomlin has ever known since becoming a head coach back in 2007. Without Big Ben, Tomlin may not even have a Super Bowl ring. That’s not to take anything away from Tomlin, he’s an incredible coach, but he’s seen the difference between when Roethlisberger’s at his best, and when he’s not.

Which is why he should be able to realize his QB no longer has it. As mentioned, Tomlin knows what he’s doing, we don’t know how backups Mason Rudolph and Dwayne Haskins are performing in practice, or how they might handle becoming the leader of the Steelers for the rest of the 2021 season.

Sitting on the outside looking in, from a fan’s perspective, it’s easy to say the Steelers need to see what they have with Rudolph or Haskins before the 2022 season begins. Yet, Tomlin may already know neither of his backup options are any better solutions than Big Ben.

If that’s the case, there’s nothing wrong with letting Roethlisberger leave the game on his own terms, getting a chance to play his way out, rather than sit and rot on the bench. It’s much better than how the New York Giants handled the end of Eli Manning’s tenure, choosing to bench him for a Geno Smith start, before turning to Daniel Jones to get an early start on gaining experience. How’s that working out in the Meadowlands? Not well.