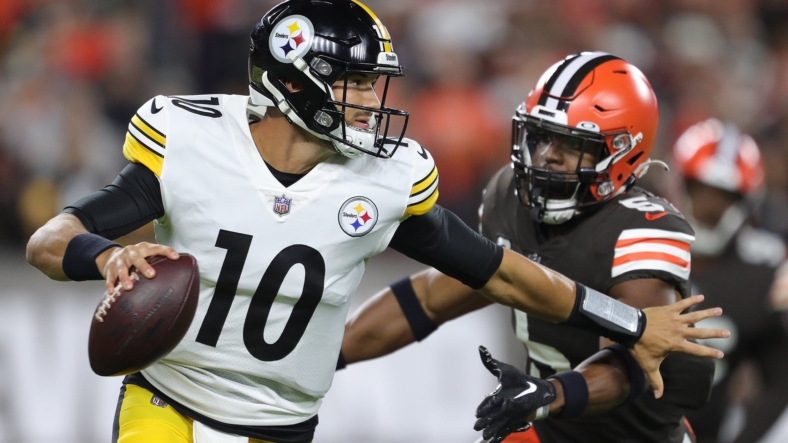 Pittsburgh Steelers quarterback Mitch Trubisky struggled once again on Thursday night, delivering his third consecutive poor performance and playing a primary role in the team’s second consecutive loss. Even with a 10-day break before Week 4, it seems a quarterback change isn’t imminent.

No team was higher on rookie Kenny Pickett heading into the 2022 NFL Draft. Pittsburgh snagged him with the 20th overall pick, drafting him in Round 1 when many viewed the young quarterback as a second-round talent. After entering the summer third on the depth chart, Pickett impressed and made a push for the starting job.

It seemingly opened the door for Pickett to surpass Trubisky as the starting quarterback. When the former No. 2 overall pick struggled in training camp, he left the door open for someone to take the starting job. However, the Steelers kept to their plan from the start and named Trubisky the starter and a team captain before Week 1.

The results thus far are underwhelming. In his first two games, Trubisky combined for a 59.1% completion rate with a 2-1 TD-INT and 76.1 passer rating. Pittsburgh held a 1-1 record in spite of the poor performance of its starting quarterback, sparking debate about whether or not a change would be made.

However, Ian Rapoport of NFL Network reported before Thursday Night Football that the Steelers haven’t had any conversations about replacing Trubisky. In fact, the plan remains for him to be the starter for the entire 2022 NFL season.

Hours later, Trubisky completed 20-of-32 pass attempts with a 57.4 QBR and averaged 6.5 yards per attempt against the Cleveland Browns. In a 29-17 loss, the Steelers’ offense converted just 11% of its third-down attempts and went 2-for-3 inside the red zone.

Immediately after the loss on Thursday, calls for a quarterback change in Pittsburgh grew louder. Despite both fans and analysts believing that benching Trubisky in favor of Pickett is the best move for the Steelers, head coach Mike Tomlin made it clear that isn’t happening.

Now would seem to be the perfect time to make a change. The Steelers don’t play again until Oct. 2, providing them with plenty of time to make Pickett the starter and build an offense around his skills. He would then make his first NFL start against the New York Jets, a favorable matchup in front of the home crowd.

Instead, Pittsburgh is adamant about sticking to its plan. The organization believes in following the model the Kansas City Chiefs used with Patrick Mahomes is the best path. However, that would mean sacrificing the 2022 season with one of the worst starting quarterbacks in the NFL. Looking long-term, it would also mean Pickett doesn’t start until his age-25 season and that would make him far older than his peers with the same level of experience.