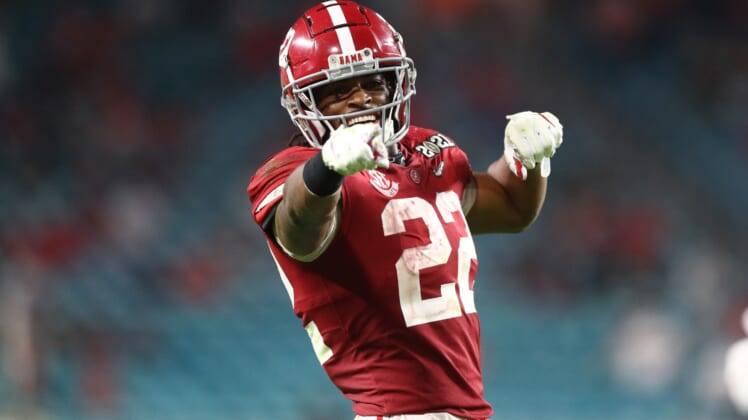 The Pittsburgh Steelers rolled to an 11-0 start this past season thanks to one of the best defenses in the NFL. With this unit set to take a step back this fall, Pittsburgh is looking to reshape its offense with the help of the 2021 NFL Draft.

When the offseason began, many wondered what the future held for Ben Roethlisberger. After weeks of negotiations with the future Hall of Fame quarterback, the Steelers finally agreed to a restructured contract to bring him back for one last run at the Super Bowl.

Big Ben should provide stability at the position in 2021, but the Steelers’ offense failed this past season for a variety of reasons. Among them, they had one of the NFL’s worst offensive lines and lacked any punch when trying to run the football. That’s something general manager Kevin Colbert is determined to fix.

According to the Pittsburgh Post-Gazette‘s Gerry Dulac, Pittsburgh is expected to draft a featured running back early in the NFL Draft. It’s likely to come with the first-round pick, No. 24 overall, but wouldn’t be any later than the team’s second-round selection.

Let’s take a quick look at what running backs the Steelers might be considering.

Evaluating the Steelers’ running back options in 2021 NFL Draft

Fortunately for Pittsburgh, there shouldn’t be a ton of competition standing in their way. The Miami Dolphins are known to be in the market for a featured running back and could take one with the 18th pick. Outside of them, there isn’t another strong threat to steal a top running back prospect from the Steelers.

Alabama Crimson Tide star Najee Harris is widely viewed as the best running back in the 2021 NFL Draft. He dominated as the featured weapon on the reigning national champions, totaling 1,891 scrimmage yards and 30 touchdowns on 294 touches.

This 6-foot-2, 230-pound running back would provide an identity the Steelers’ offense is missing. He is more than willing to lower his shoulder into a defender and his strength makes him a real problem for defenders at the second level. Not only is he a talented runner, but Harris is also a dangerous weapon out of the backfield. Pro Football Focus compared him to Matt Forte and that’s the type of every-down back Pittsburgh would love.

If Harris is off the board, many will turn their attention to Travis Etienne. He is one of the most accomplished running backs in college football history with the kind of speed that makes 90-yard runs look easy. He doesn’t have elite size (5-foot-10) and he never really showed that he could be a workhorse at Clemson. But Etienne is a home-run hitter with underrated skills as a receiving back. He might be a reach at No. 24 overall, but it would also likely be Pittsburgh’s only hope at landing him.

Finally, there is our favorite fit for the Pittsburgh Steelers. North Carolina running back Javonte Williams didn’t get a ton of work early in his career with the Tar Heels, but he exploded this past season for 1,168 rushing yards and 19 touchdowns.

He embraces the physicality of his position, seeking out defenders who want to take him down and bouncing right off them. Williams knows how to stay on his feet, regardless of what angle he is being hit from. He would fit this offense quite nicely and an ideal scenario might have the Steelers draft a right tackle at No. 24 and then trade into the top-40 picks for Williams.