Dwayne Haskins made the 53-man roster with the Pittsburgh Steelers to open the 2021 regular season.

Haskins, a 2019 first-round pick of the Washington Football Team out of Ohio State, was released last year in his second season with the team due to a combination of poor performance and a lack of professionalism.

According to multiple reports, Haskins will open the season on the Pittsburgh roster.

Signed by the Steelers, Haskins was considered a longshot or practice squad candidate as many teams keep just two quarterbacks on their active roster. 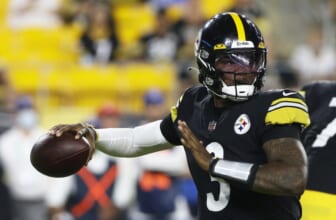 But Haskins has put in the work to become a professional, head coach Mike Tomlin said, and earned an extended chance with the team behind high-paid starter Ben Roethlisberger and backup Mason Rudolph. Rudolph signed a contract extension in the offseason.

Roethlisberger, 39, returned to the team for what could be a final season. Two years removed from right elbow surgery, Roethlisberger reported for his 18th season in better physical condition and said he felt rejuvenated after a quiet offseason.

Rudolph, 26, was a third-round pick in 2018. He played in five games last season, including a start in the regular-season finale against the Cleveland Browns, the ninth of his career.