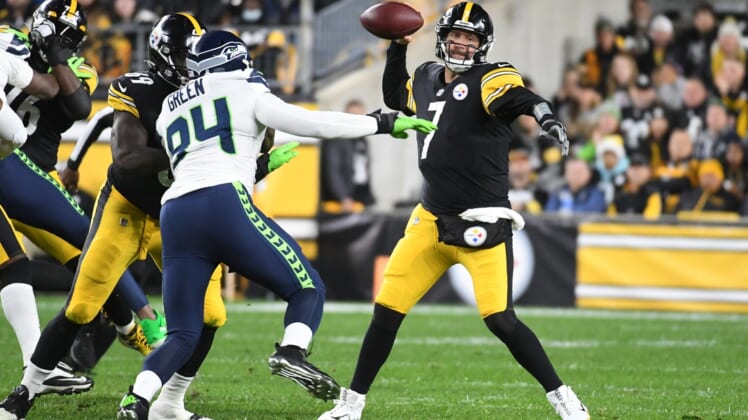 The field goal was set up by T.J. Watt’s strip sack of Geno Smith, with Devin Bush recovering the ball at Seattle’s 16-yard line.

The Seahawks almost didn’t get a chance to kick the tying field goal. With 18 seconds left, DK Metcalf caught a 12-yard pass along the sidelines. Instead of stepping out of bounds, he tried to turn up field and fumbled. Teammate Freddie Swain recovered and, after the officials reviewed the pass completion, Smith spiked the ball with three seconds left to stop the clock.

Ben Roethlisberger completed 29 of 40 passes for 229 yards and a touchdown for the Steelers (3-3) and Najee Harris rushed for 81 yards on 24 carries and made six receptions for 46 yards and a score.

Seattle defensive end Darrell Taylor was carted off the field after suffering an apparent neck injury while trying to tackle Harris on a run up the middle with 3:10 remaining in regulation. Taylor was taken by ambulance to a nearby hospital, but NBC reported he had movement in his extremities.

Trailing 14-0, the Seahawks opened the second half with a 10-play touchdown drive, with Collins scoring on a 2-yard run. Collins rushed eight times for 58 yards in the series.

The Steelers responded with a 27-yard field goal by Boswell to make it 17-7.

The Seahawks scored again on their next drive, with Smith throwing a 1-yard touchdown pass to tight end Will Dissly.

Seattle’s offense stalled on the next possession, but Myers kicked a 40-yard field goal to tie it at 17-all with 12:59 remaining.

The Steelers took a 14-0 halftime lead. Harris opened the scoring on a 5-yard touchdown pass from Roethlisberger with 10:01 remaining in the second quarter. Tight end Eric Ebron scored on a 1-yard run with 1:04 left.