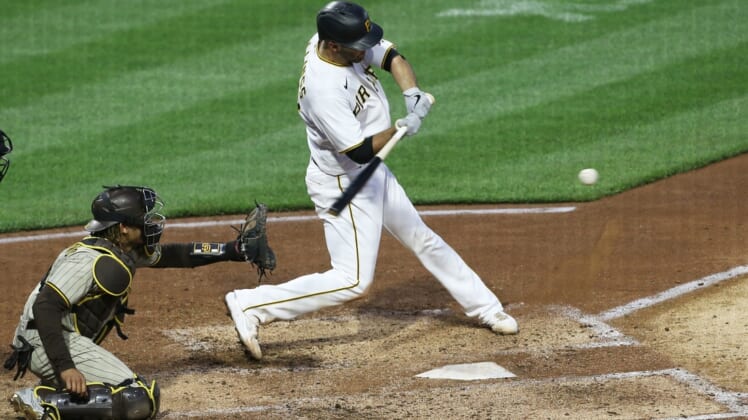 Jacob Stallings hit a two-run double and an RBI single Tuesday to help the Pittsburgh Pirates top the visiting San Diego Padres 8-4 in a sloppy game.

Erik Gonzalez added an RBI double and RBI single, and Colin Moran, Bryan Reynolds and Kevin Newman an RBI single each for the Pirates.

Trent Grisham homered and Eric Hosmer added an RBI single for the Padres, who had won four straight.

San Diego starter Blake Snell lasted two-thirds of an inning, racking up 38 pitches. He allowed three runs and three hits, with two walks and one strikeout.

Padres right fielder Wil Myers left in the fourth inning because of an unspecified injury.

On the fourth pitch of the game, Grisham hit his third homer in 12 at-bats this season, blasting a shot to center for a 1-0 San Diego lead. Kuhl later issued his second walk of the inning, to Jurickson Profar, with the bases loaded. That scored Jake Cronenworth, who had doubled, to make it 2-0.

The Pirates scored three in the bottom of the first, all with two outs. Reynolds singled, Phillip Evans walked and Stallings drove in both with a double to tie it. Gonzalez’s RBI double gave Pittsburgh a 3-2 lead.

San Diego tied it in the second when Grisham walked, went to second on Kuhl’s error, to third on a fly ball and scored on a wild pitch.

Pittsburgh picked up two runs in the bottom of the second. Reynolds’ RBI single produced a 4-3 lead, and he scored on Stallings’ single to make it 5-3.

Newman’s RBI single in the third upped it to 6-3.

In the fourth, Hosmer’s RBI single drew San Diego to within 6-4.