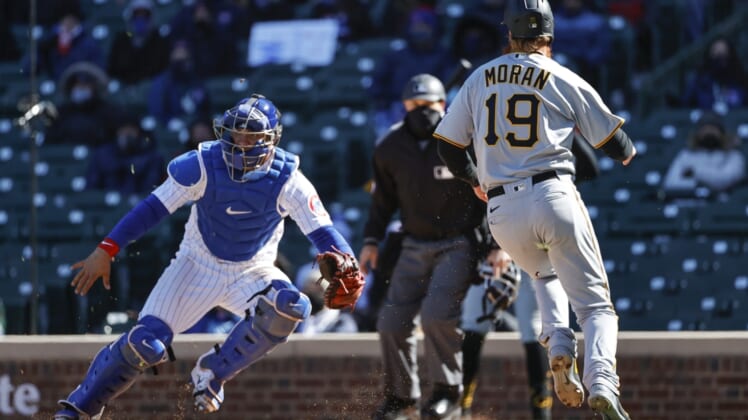 Ke’Bryan Hayes belted a two-run homer in his first at-bat of the season and Adam Frazier drove in two runs as the visiting Pittsburgh Pirates opened with a 5-3 victory over the Chicago Cubs on Thursday.

Cubs starter Kyle Hendricks (0-1) walked Frazier to start the game before Hayes silenced the limited-capacity crowd and became the youngest Pirates hitter to homer on Opening Day since Barry Bonds in 1988.

Chicago was held to two hits by seven pitchers and struck out 13 times.

The temperature at game time was a chilly 36 degrees with heavy winds, leading to some uncharacteristic control issues for Hendricks. After walking a total of eight batters in 81 1/3 innings last season, Hendricks gave up three runs with three walks over three innings while throwing 63 pitches.

Hayes is one of the National League’s top rookies after making an impressive debut last September, when he hit .376 in 24 games. The 24-year-old led the majors in hitting in spring training and is a bright spot for the rebuilding Pirates, who won despite going 3-for-20 with runners in scoring position.

Chad Kuhl allowed two runs (one unearned) over three innings before turning it over to six relievers, including Sam Howard (1-0), who struck out the side in the sixth. Richard Rodriguez worked around a one-out walk in the ninth for the save.

Chicago complied with COVID-19 safety precautions and welcomed a crowd of 10,343, but the fans had few reasons to cheer.

The Pirates never trailed and took a 5-2 lead in the seventh on Frazier’s two-out double. After Willson Contreras reached base on an error to lead off the third inning, the Cubs did not have another baserunner until Eric Sogard began the eighth with a double and scored on a sacrifice fly.

Cubs pitchers walked the leadoff hitter in five of the first six innings and issued a total of 11 walks. Jacob Stallings and Kevin Newman joined Frazier with two hits apiece for Pittsburgh, which opened the season on the road for the fifth straight year.

The NL Central teams are off Friday before resuming the three-game series on Saturday.