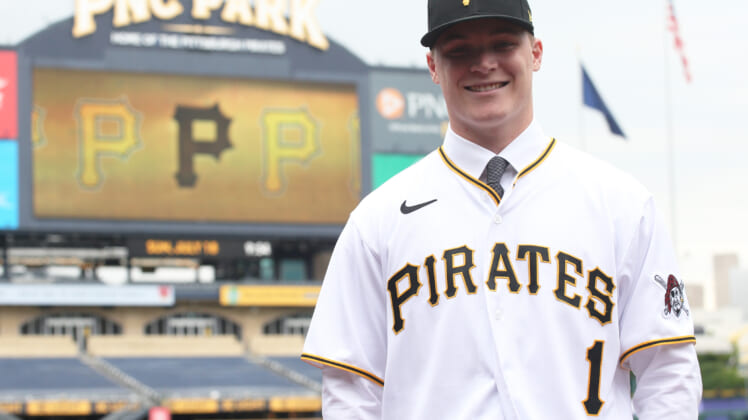 The Pittsburgh Pirates organization may have left the baseball community in shock when they selected Louisville catcher Henry Davis No. 1 overall in the 2021 MLB Draft, but he’s making anyone who doubted his abilities look foolish now.

After just 31 games in High-A ball, the Pirates have already promoted Davis up to Double-A for their Altoona Curve minor-league affiliate.

It didn’t take Davis long to make an impression there either.

The 23rd-ranked prospect on the MLB.com top-100, Davis could be poised to rise up the list even further if his recent success is any indication of what’s to come.

In his first game for the Curve on Tuesday night, Davis got the start behind the plate, batting second in their lineup. Their confidence in Davis paid off, with the 22-year-old power hitter taking a walk and smacking a two-run home run in his Double-A debut, helping his team win a one-run game.

Davis is the No. 2 prospect in Pittsburgh’s development system and the 4th-ranked catching prospect in all of baseball.

Not only does his bat pass the eye test, but Davis also has a rocket arm, helping keep runners at bay.

While MLB.com projects Davis to be ready for the big leagues by 2024, if he can rake in AA, there’s no reason why he can’t beat the current projections, just as he did when entering the league a year ago.

Davis himself is confident in his abilities, but he understands the process.

“Do I think I could contribute to them winning games? 100%. But my job is to be here. I’m not Ben Cherington. He has a lot on his plate. I have a lot on mine. We each just try and do our jobs.”

The current starting catcher at the MLB level, Roberto Perez, is signed to a one-year, $5,000,000 contract. Despite being a two-time Gold Glove winner with Cleveland, there’s no guarantee the Pirates will retain the 33-year-old for another season in 2023. Maybe we’ll see Davis sooner than we think.

For now, we’ll have to keep watching Davis from afar. If he can keep mashing 400-foot taters, he’ll be hard to miss.