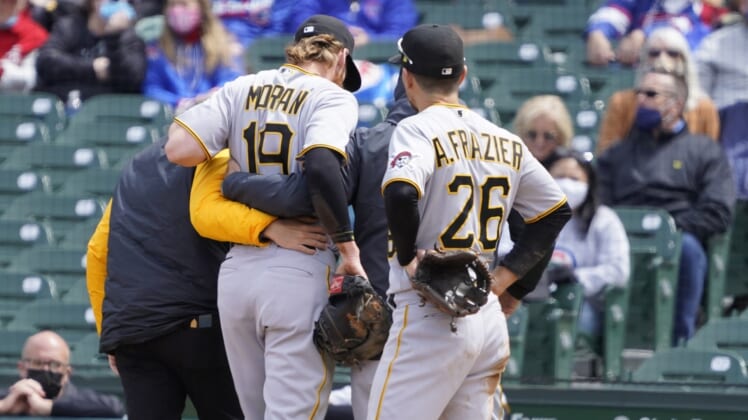 May 8, 2021; Chicago, Illinois, USA; Pittsburgh Pirates first baseman Colin Moran (19) leaves the game after being hurt on a play at first base against the Chicago Cubs during the first inning at Wrigley Field. Mandatory Credit: David Banks-USA TODAY Sports

The Pittsburgh Pirates placed first baseman Colin Moran on the 10-day injured list due to a left groin strain, the team announced Sunday.

Moran, 28, exited Saturday’s 3-2 loss to the Chicago Cubs in the first inning while making a play in the field.

Todd Frazier replaced Moran, who is hitting .297 with seven doubles, four homers and 19 RBIs in 32 games. Pittsburgh has been without injured third baseman Ke’Bryan Hayes, who on Sunday was transferred from the 10- to 60-day injured list, since the second game of the season.

Stokes, 25, went 2-for-9 with a solo homer in four games with Indianapolis. He was a non-roster invitee with the Pirates in spring training after being claimed off waivers from the Detroit Tigers on Jan. 12.

The Pirates also claimed outfielder Ben Gamel off waivers from Cleveland. Gamel, 28, was designated for assignment by the Indians after going 1-for-14 in 11 games this season.

The Pirates designated right-hander Michael Feliz for assignment to make room on the roster for Gamel.