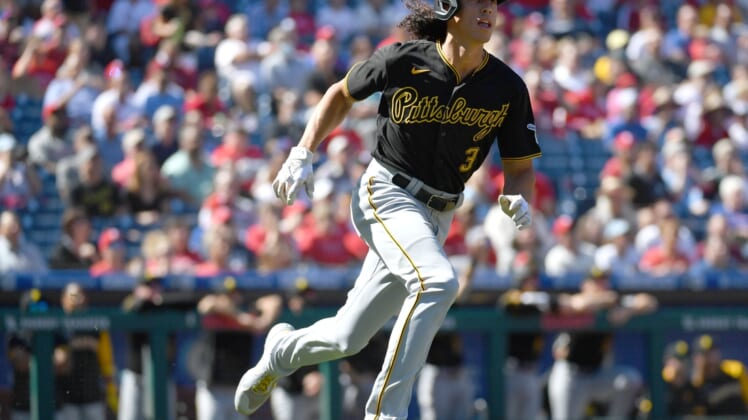 Cole Tucker homered, singled and walked twice to lift the Pittsburgh Pirates past the host Philadelphia Phillies 6-0 on Sunday.

Ke’Bryan Hayes doubled, singled and drove in two runs and Yoshi Tsutsugo added a single and two RBI for the Pirates (58-97), who snapped a three-game losing streak.

Odubel Herrera produced two hits for the Phillies (81-75), who had their five-game winning streak snapped. The Phillies had won the first three games against the Pirates.

Philadelphia is two games behind the Atlanta Braves for first place in the National League East. The Braves play the San Diego Padres on Sunday.

Phillies starter Hans Crouse made his major league debut and tossed three innings. Crouse (0-1) gave up two hits and one run with four walks and one strikeout.

Tucker lined a solo homer off the right field foul pole for a 1-0 Pittsburgh lead on Crouse’s first career pitch.

Jean Segura singled with two outs in the third and Harper followed with a single. J.T. Realmuto struck out to end the threat.

In the fifth, the Phillies had runners on first and second with two outs, but Realmuto grounded out.

Hoy Park walked with two outs in the sixth and pinch hitter Wilmer Difo struck out on three pitches against Jose Alvarado.

Tucker walked to begin the seventh and moved to second on a balk by Alvarado. Tsutsugo grounded out and Bryan Reynolds was walked intentionally. The runners moved up on a wild pitch and Colin
Moran walked. Hayes responded with a two-run double, though Moran was thrown out at home, for a 3-0 lead.

Tsutsugo produced a two-run single in the eighth for a 5-0 advantage.

The Pirates went ahead 6-0 in the ninth when Ramon Rosso balked, allowing Hayes to score from third.