The Pirates also reinstated outfielder Ben Gamel from the 10-day injured list. Gamel, 29, had been sidelined since Aug. 5 due to a right hamstring strain. 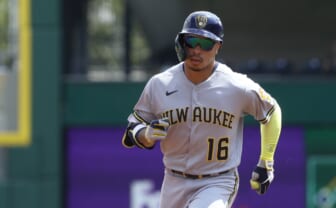 Gamel, claimed off waivers from the Cleveland Indians in May, is hitting .261 with six home runs and 18 RBIs in 81 games this season.

In additional roster moves Sunday, the Pirates placed right-hander Bryse Wilson on the 10-day injured list with right arm fatigue. Wilson, 23, is 2-5 with a 5.55 ERA in 11 starts this year.

Outfielder Anthony Alford also was placed on the 10-day IL — retroactive to Aug. 13 — with a lower back strain. Alford, 27, is hitting .146 with one RBI in 16 games this season.

And right-hander Shea Spitzbarth, who served as the 27th man for the second game of Saturday’s doubleheader, was returned to Indianapolis.