Pittsburgh Penguins star Sidney Crosby, teammate Brian Dumoulin and coach Mike Sullivan have cleared COVID-19 protocols and are expected to be back with the team for Sunday’s road game against the Washington Capitals.

Crosby and Dumoulin went into protocol on Nov. 3 and Sullivan joined the pair one day later. Overall, eight Pittsburgh players have been part of the outbreak.

“Throughout (the pandemic), everyone is a little bit different in terms of how they come through it,” acting cocah Todd Reirden told reporters before Saturday’s game in Ottawa. “We’ve seen both extremes of it. And then even when players are playing, a lot of them that have gone through it are not up to 100 percent. It’s something that’s really tough to gauge as we continue to move forward through this virus.” 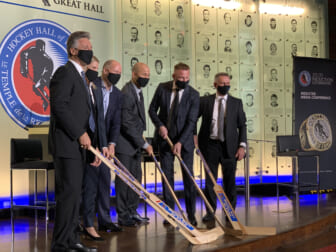 Crosby, an eight-time All-Star, has played in just one game this season after having wrist surgery in September. Dumoulin has one assist in eight games.

The Penguins are 2-0-2 during Sullivan’s absence entering the game against the Senators. Pittsburgh is 5-3-4 this season.